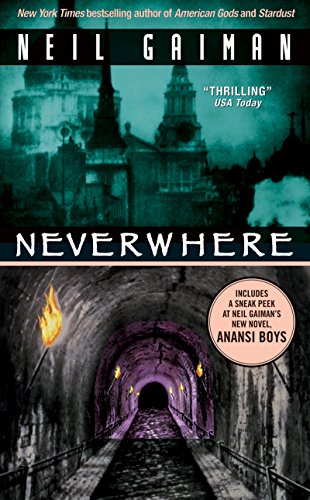 Neverwhere's protagonist, Richard Mayhew, learns the hard way that no good deed goes unpunished. He ceases to exist in the ordinary world of London Above, and joins a quest through the dark and dangerous London Below, a shadow city of lost and forgotten people, places, and times. His companions are Door, who is trying to find out who hired the assassins who murdered her family and why; the Marquis of Carabas, a trickster who trades services for very big favors; and Hunter, a mysterious lady who guards bodies and hunts only the biggest game. London Below is a wonderfully realized shadow world, and the story plunges through it like an express passing local stations, with plenty of action and a satisfying conclusion. The story is reminiscent of Douglas Adams's The Hitchhiker's Guide to the Galaxy, but Neil Gaiman's humor is much darker and his images sometimes truly horrific. Puns and allusions to everything from Paradise Lost to The Wonderful Wizard of Oz abound, but you can enjoy the book without getting all of them. Gaiman is definitely not just for graphic-novel fans anymore. --Nona Vero

Richard Mayhew is a plain man with a good heart -- and an ordinary life that is changed forever on a day he stops to help a girl he finds bleeding on a London sidewalk. From that moment forward he is propelled into a world he never dreamed existed -- a dark subculture flourishing in abandoned subway stations and sewer tunnels below the city -- a world far stranger and more dangerous than the only one he has ever known...