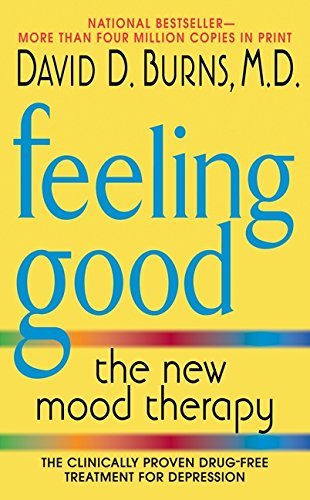 The good news is that anxiety, guilt, pessimism, procrastination, low self-esteem, and other "black holes" of depression can be cured without drugs. In Feeling Good, eminent psychiatrist, David D. Burns, M.D., outlines the remarkable, scientifically proven techniques that will immediately lift your spirits and help you develop a positive outlook on life. Now, in this updated edition, Dr. Burns adds an All-New Consumer′s Guide To Anti-depressant Drugs as well as a new introduction to help answer your questions about the many options available for treating depression.

David D. Burns, M.D., a clinical psychiatrist, conveys his ideas with warmth, compassion, understanding, and humor unmatched by any other writer in the self-help field. His bestselling Feeling Good: The New Mood Therapy has sold more than three million copies to date. In a recent national survey of mental health professionals, Feeling Good was rated number one—from a list of more than one thousand—as the most frequently recommended self-help book on depression. His Feeling Good Handbook was rated number two in the same survey.

Dr. Burns's entertaining teaching style has made him a popular lecturer for general audiences and mental health professionals throughout the country as well as a frequent guest on national radio and television programs. He has received numerous awards including the Distinguished Contribution to Psychology Through the Media Award from the Association of Applied and Preventive Psychology. A magna cum laude and Phi Beta Kappa graduate of Amherst College, Dr. Burns received his medical degree from the Stanford University School of Medicine. He is currently clinical associate professor of psychiatry at the Stanford University School of Medicine and is certified by the National Board of Psychiatry and Neurology.

A Breakthrough In the Treatment of Mood Disorders

Depression has been called the world's number one public health problem. In fact, depression is so widespread it is considered the common cold of psychiatric disturbances. But there is a grim difference between depression and a cold. Depression can kill you. The suicide rate, studies indicate, has been on a shocking increase in recent years, even among children and adolescents. This escalating death rate has occurred in spite of the billions of antidepressant drugs and tranquilizers that have been dispensed during the past several decades.

This might sound fairly gloomy. Before you get even more depressed, let me tell you the good news. Depression is an illness and not a necessary part of healthy living. What's more important--you can overcome it by learning some simple methods for mood elevation. A group of psychiatrists and psychologists at the University of Pennsylvania School of Medicine has reported a significant breakthrough in the treatment and prevention of mood disorders. Dissatisfied with traditional methods for treating depression because they found them to be slow and ineffective, these doctors developed and systematically tested an entirely new and remarkably successful approach to depression and other emotional disorders. A series of recent studies confirms that these techniques reduce the symptoms of depression much more rapidly than conventional psychotherapy or drug therapy. The name of this revolutionary treatment is "cognitive therapy."

I have been centrally involved in the development of cognitive therapy, and this book is the first to describe these methods to the general public. The systematic application and scientific evaluation of this approach in treating clinical depression traces its origins to the innovative work of Drs. Albert Ellis and Aaron T. Beck, who began to refine their unique approach to mood transformation in the mid-1950's and early 1960's.* Their pioneering efforts began to emerge into prominence in the past decade because of the research that many mental-health professionals have undertaken to refine and evaluate cognitive therapy methods at academic institutions in the United States and abroad.

Cognitive therapy is a fast-acting technology of mood modification that you can learn to apply on your own. It can help you eliminate the symptoms and experience personal growth so you can minimize future upsets and cope with depression more effectively in the future.

Rapid Symptomatic Improvement: In milder depressions, relief from your symptoms can often be observed in as short a time as twelve weeks.

Understanding: A clear explanation of why you get moody and what you can do to change your moods. You will learn what causes your powerful feelings; how to distinguish "normal" from "abnormal" emotions; and how to diagnose and assess the severity of your upsets.

Self-control: You will learn how to apply safe and effective coping strategies that will make you feel better whenever you are upset. I will guide you as you develop a practical, realistic, step-by-step self-help plan. As you apply it, your moods can come under greater voluntary control.

Prevention and Personal Growth: Genuine and long-lasting prophylaxis (prevention) of future mood swings can effectively be based on a reassessment of some basic values and attitudes which lie at the core of your tendency toward painful depressions. I will show you how to challenge and reevaluate certain assumptions about the basis for human worth.

The problem-solving and coping techniques you learn will encompass every crisis in modem life, from minor irritations to major emotional collapse. These will include realistic problems, such as divorce, death, or failure, as well as those vague, chronic problems that seem to have no obvious external cause, such as low self-confidence, frustration, guilt, or apathy.

The question may now occur to you, "Is this just another self-help pop psychology?" Actually, cognitive therapy is one of the first forms of psychotherapy which has been shown to be effective through rigorous scientific research under the critical scrutiny of the academic community. This therapy is unique in having professional evaluation and validation at the highest academic levels. It is not just another self-help fad but a major development that has become an important part of the mainstrem of modem psychiatric research and practice. Cognitive therapy's academic foundation. has enhanced its impact and should give it staying power for years to come. But don't be turned off by the professional status that cognitive therapy has acquired. Unlike much traditional psychotherapy, it is not occult and anti-intuitive. It is practical and based on common sense, and you can make it work for you.

The first principle of cognitive therapy is that all your moods are created by your "cognitions," or thoughts. A cognition refers to the way you look at things--your perceptions, mental attitudes, and beliefs. It includes the way you interpret things--what you say. about something or someone to yourself. You feel the way you do right now because of the thoughts you are thinking at this moment.

Let me illustrate this. How have you been feeling as you read this? You might have been thinking, "Cognitive therapy sounds too good to be true. It would never work for me." If your thoughts run along these lines, you are feeling skeptical or even discouraged. What causes you. to feel that way? Your thoughts. You create those feelings by the dialogue you are having with yourself about this book!

Conversely, you may have felt a sudden uplift in mood because you thought, "Hey, this sounds like something which might finally help me." Your emotional reaction is generated not by the sentences you are reading but by the way you are thinking. The moment you have a certain thought and believe it, you will experience an immediate emotional response. Your thought actually creates the emotion.