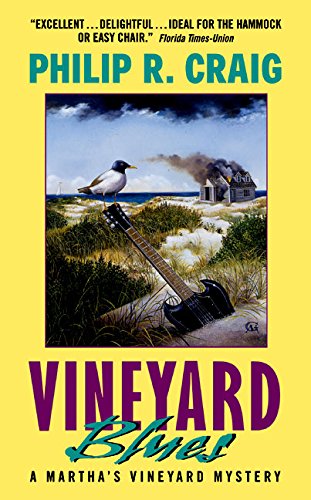 A surprise visit from a dear old friend only adds to the joys of good weather, great fishing, warm breezes and loving family for J. W. Jackson this idyllic island summer. The ex-Boston cop is thrilled to see accomplished bluesman Corrie Appleyard strolling up his driveway, guitar case in hand. But days later, J.W.'s elation turns to dread when a rundown summer shack burns to the ground -- the latest in a string of suspicious fires. And when an unidentified corpse is discovered in the ashes, J. W. fears that the charred remains are Corrie's. Now twin obligations to friendship and the truth are leading him into an ugly morass of arson, extortion, secrets, and murder. And he'll go to the dangerous ends of paradise to bring a killer to justice -- because this outrage has slammed J. W. Jackson in the heart.

You can almost taste the freshly caught bluefish and smell the tangy salt air in Philip Craig's newest Martha's Vineyard mystery, a seasonal delight featuring former Boston policeman J.W. Jackson. J.W. hasn't seen legendary bluesman Corrie Appleyard since he was a child, and when Corrie arrives on the Vineyard for a rare concert appearance, J.W. couldn't be happier. It's almost enough to take his mind off the series of arson fires that have destroyed the dilapidated summer cottages that a local slumlord rents out at outrageously high prices to college kids who've come to work and play in the famous summer colony. But when Corrie's precious guitar is found at the site of the latest fire, and an unidentified body is pulled from the ruins, J.W. fears the worst.

Although he's already busy trying to track down a blackmailer who's been threatening Susanna Quick, his wife Zee's close friend, J.W. agrees to investigate the arson fires for the owner of the cottages, which leads him into still another unsolved mystery: why is Zee so opposed to his newest client? By the time the connection between the arsonist, the slumlord, Susanna, and Zee is unraveled in a surprising denouement, you'll have worked up an appetite. Luckily, the author has included the recipes of Vineyard favorites at the end of this tasty mystery. J.W. is an extremely appealing hero, a man of simple pleasures who's not averse to putting himself on the line to defend his wife, his family, and his close-knit community of friends and neighbors . The pacing won't keep you from a nap after a day of sun and salt water, but the book moves along nicely, the Vineyard landscape is lovingly and authentically evoked, and the characters are well drawn. Vineyard Blues is another satisfying outing for this accomplished writer (who also brought us A Fatal Vineyard Season, A Shoot on Martha's Vineyard, Death on a Vineyard Beach) and his likable protagonist. --Jane Adams

Philip R. Craig grew up on a small cattle ranch near Durango, Colorado, before going off to college at Boston University, where he was an All-American fencer. He earned his M.F.A. at the University of Iowa Writers' Workshop. A recently retired professor of English at Wheelock College in Boston, he and his wife Shirley now live year-round on Martha's Vineyard.