Items related to The Curse of Chalion 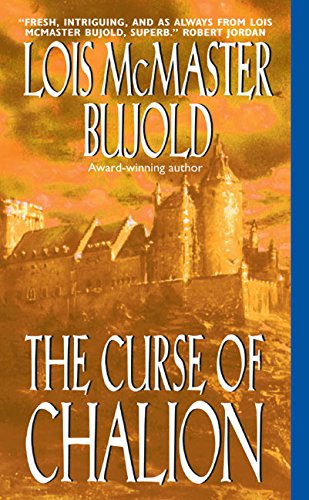 A man broken in body and spirit, Cazaril has returned to the noble household he once served as page, and is named, to his great surprise, secretary-tutor to the beautiful, strong-willed sister of the impetuous boy who is next in line to rule. It is as assignment Cazaril dreads, for it must ultimately lead him to the place he most fears: the royal court of Cardegoss, where the powerful enemies who once placed him in chains now occupy lofty positions. but it is more than the traitorous intrigues of villains that threaten Cazaril and the Royesse Iselle here, for a sinister curse hangs like a sword over the entire blighted House of Chalion and all who stand in their circle. And only by employing the darkest, most forbidden of magics can Cazaril hope to protect his royal charge -- an act that will mark the loyal, damaged servant as a tool of the miraculous ... and trap him, flesh and soul, in a maze of demonic paradox, damnation, and death.

My fantasy novels are not hard toorder. Easiest of all is The Spirit Ring, which is a stand-alone, oraquel, as some wag once dubbed books that for some obscure reason failed tospawn a subsequent series. Next easiest are the four volumes of The SharingKnife--in order, Beguilement, Legacy, Passage, and Horizon--whichI broke down and actually numbered, as this was one continuous tale dividedinto non-wrist-breaking chunks.

What were called the Chalion booksafter the setting of its first two volumes, but which now that the geographicscope has widened I'm dubbing the World of the Five Gods, were written to bestand-alones as part of a larger whole, and can in theory be read in any order.Some readers think the world-building is easier to assimilate when the booksare read in publication order, and the second volume certainly containsspoilers for the first (but not the third.) In any case, the publication orderis:

In terms of internal world chronology, The Hallowed Hunt wouldfall first, the Penric novellas perhaps a hundred and fifty years later, and TheCurse of Chalion and Paladin of Souls would follow a century or soafter that.

The short story collection ProtoZoa contains five very early tales--three (1980s) contemporary fantasy, twoscience fiction--all previously published but not in this handy format. Thenovelette "Dreamweaver's Dilemma" may be of interest to Vorkosigan completists,as it is the first story in which that proto-universe began, mentioning BetaColony but before Barrayar was even thought of.

Sidelines:Talks and Essays is just what it says on the tin--a collection of threedecades of my nonfiction writings, including convention speeches, essays,travelogues, introductions, and some less formal pieces. I hope it will provean interesting companion piece to my fiction.

Many pixels have been expended debating the 'best' order inwhich to read what have come to be known as the Vorkosigan Books (or Saga), theVorkosiverse, the Miles books, and other names. The debate mainly revolvesaround publication order versus internal-chronological order. I favor internalchronological, with a few adjustments.

It was always my intention to write each book as astand-alone, so that the reader could theoretically jump in anywhere. Whilestill somewhat true, as the series developed it acquired a number of sub-arcs,closely related tales that were richer for each other. I will list the sub-arcs,and then the books, and then the duplication warnings. (My publishing historyhas been complex.) And then the publication order, for those who want it.

Shards of Honor and Barrayar. The first twobooks in the series proper, they detail the adventures of Cordelia Naismith ofBeta Colony and Aral Vorkosigan of Barrayar. Shards was my very firstnovel ever; Barrayar was actually my eighth, but continues the tale thenext day after the end of Shards. For readers who want to be sure ofbeginning at the beginning, or who are very spoiler-sensitive, start with thesetwo.

The Warrior's Apprentice and The Vor Game(with, perhaps, the novella "The Mountains of Mourning" tucked in between.) TheWarrior's Apprentice introduces the character who became the series'linchpin, Miles Vorkosigan; the first book tells how he created a spacemercenary fleet by accident; the second how he fixed his mistakes from thefirst round. Space opera and military-esque adventure (and a number of otherthings one can best discover for oneself), The Warrior's Apprenticemakes another good place to jump into the series for readers who prefer a youngmale protagonist.

After that: Brothers in Arms should be read before MirrorDance, and both, ideally, before Memory.

Komarr makes another alternate entry point for theseries, picking up Miles's second career at its start. It should be read beforeA Civil Campaign.

Borders of Infinity, a collection of three of thefive currently extant novellas, makes a good Miles Vorkosigan early-adventuresampler platter, I always thought, for readers who don't want to committhemselves to length. (But it may make more sense if read after TheWarrior's Apprentice.) Take care not to confuse the collection-as-a-wholewith its title story, "The Borders of Infinity".

Falling Free takes place 200years earlier in the timeline and does not share settings or characters withthe main body of the series. Most readers recommend picking up this storylater. It should likely be read before Diplomatic Immunity, however,which revisits the "quaddies", a bioengineered race of free-fall dwellers, inMiles's time.

The novels in the internal-chronological list below appearin italics; the novellas (officially defined as a story between 17,500 wordsand 40,000 words) in quote marks.

The novella "Weatherman" is anout-take from the beginning of the novel The Vor Game. If you alreadyhave The Vor Game, you likely don't need this.

The original 'novel' Borders ofInfinity was a fix-up collection containing the three novellas "TheMountains of Mourning", "Labyrinth", and "The Borders of Infinity", togetherwith a frame to tie the pieces together. Again, beware duplication. The framestory does not stand alone.

This is also the order in which theworks were written, apart from a couple of the novellas, but is not identicalto the internal-chronological. It goes:

One of the most respected writers in the field of speculative fiction, Lois McMaster Bujold burst onto the scene in 1986 with Shards of Honor, the first of her tremendously popular Vorkosigan Saga novels. She has received numerous accolades and prizes, including two Nebula Awards for best novel (Falling Free and Paladin of Souls), four Hugo Awards for Best Novel (Paladin of Souls, The Vor Game, Barrayar, and Mirror Dance), as well as the Hugo and Nebula Awards for her novella The Mountains of Mourning. Her work has been translated into twenty-one languages. The mother of two, Bujold lives in Minneapolis, Minnesota.

THE CURSE OF CHALION