Items related to The Iliad 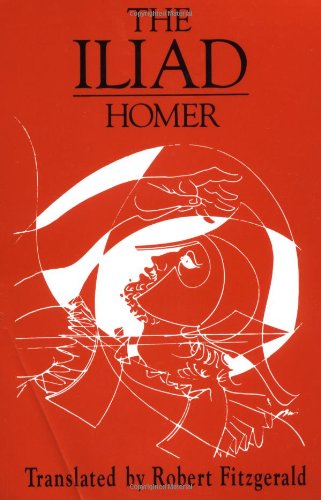 This translation of The Iliad equals Fitzgerald's earlier Odyssey in power and imagination. It recreates the original action as conceived by Homer, using fresh and flexible blank verse that is both lyrical and dramatic.

First Seven Lines of the Iliad: This reconstruction is based on what we know about the earliest Greek orthography. The Walls of Troy: The translator standing before the walls of the sixth city at Troy. The Judgment of Paris: On the right a youthful Paris sits on a stone in a rural location. The sheep near his feet indicates that he is a shepherd. Athenian red-figure water jar, c. 450 BC. The Rage of Achilles: The seated Agamemnon holds the scepter of authority and sits on a throne, his lower body wrapped in a robe. Athena seizes Achilles from behind by the hair. Roman mosaic from Pompeii, c. First Century AD. The Wedding of Zeus and Hera: A half-naked Zeus, sitting on a rock, clasps the wrist of Hera. One of her breasts is exposed as Hera removes her head covering in a traditional gesture of submission. c. 540 BC Hephaistos Prepares Arms for Achilles: The smithy-god, bearded and wearing a felt cap, sits in an elaborately draped hall on a platform holding a cloth with which he is polishing the finished shield. Between him and Thetis are the breastplate and the shinguards (the surface of the fresco is damaged here). From Pompeii, c. AD 60. From the Author:

"This gave me the opportunity to participate in a project featuring two great and important works, Homer's Iliad and Odyssey, and to further support the revival of Greek History and the Classics."