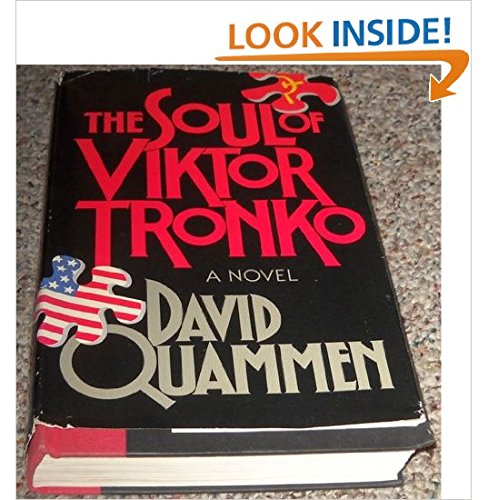 When journalist Michael Kessler investigates the brutal murder of an old friend, the writer becomes involved in a deadly twenty-year-old secret

David Quammen is the author of a dozen fiction and nonfiction books, including Blood Line and The Song of the Dodo. Spillover, his most recent book, was shortlisted for several major awards. A three-time National Magazine Award winner, he is a contributing writer for National Geographic and has written also for Harper’s, Outside, Esquire, The Atlantic, Powder, and Rolling Stone. He travels widely on assignment, usually to jungles, mountains, remote islands, and swamps.

Nancy Pearl is a librarian and lifelong reader. She regularly comments on books on National Public Radio’s Morning Edition. Her books include 2003’s Book Lust: Recommended Reading for Every Mood, Moment and Reason, 2005’s More Book Lust: 1,000 New Reading Recommendations for Every Mood, Moment and Reason; Book Crush: For Kids and Teens: Recommended Reading for Every Mood, Moment, and Interest, published in 2007, and 2010’s Book Lust To Go: Recommended Reading for Travelers, Vagabonds, and Dreamers. Among her many awards and honors are the 2011 Librarian of the Year Award from Library Journal; the 2011 Lifetime Achievement Award from the Pacific Northwest Booksellers Association; the 2010 Margaret E. Monroe Award from the Reference and Users Services Association of the American Library Association; and the 2004 Women's National Book Association Award, given to "a living American woman who ...has done meritorious work in the world of books beyond the duties or responsibilities of her profession or occupation."

Peacefully engrossed in writing a biography of a termite collector, Kessler gets a surprise visit from an old friend. Mel is a one-time CIA agent now ready to reveal an espionage event that occurred two decades earlier. When Mel is murdered, Kessler is seduced by the whiff of a really big story. He pursues the leads that suggest one Victor Tronko was a fake defector let loose to mask the presence of a KGB mole in the CIA's highest levels. When Kessker dislodges the wasps' nest, retribution strikes. Sinuously intricate and compellingly realistic, this cloak-and-dagger caper will be as well received as The Zolta Configuration. While most thrillers let the reader bob like a cork on the surface, this author's knack is to draw down a reader's full attention with complicated dialogue, shifts in narrative, and intense activity. Barbara Conaty, Medical Coll. of Wisconsin, Milwaukee
Copyright 1987 Reed Business Information, Inc.