Items related to Written in Bone 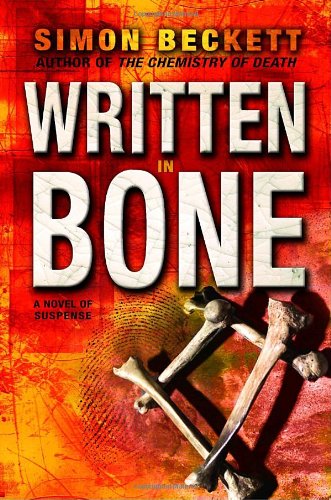 “I took the skull from its evidence bag and gently set it on the stainless steel table. ‘Tell me who you are. . . .’ ” With this silent plea, forensic expert Dr. David Hunter ignites a harrowing murder investigation on a windswept Scottish island, and a tale of menace, sexuality, and revenge unravels—along with the chilling message that a killer has...

Dr. David Hunter should be in London with the woman he loves and a past he can’t quite shake off. Instead, as a favor to a beleaguered cop, Hunter travels to a remote island in the Outer Hebrides to inspect a baffling set of remains. A forensic anthropologist, he has seen bodies destroyed by all forms of violence, but even he is surprised at what he finds: human remains burned beyond recognition—all within the confines of an otherwise undamaged, unoccupied cottage. Local police want to rule the death accidental. But Hunter’s examination of the victim’s charred skull tells him that this woman, no doubt a stranger to the close-knit island of Runa, was murdered by someone nearby.

Within days, two more people are dead by fire. Hunter’s job is to coax the dead into telling their stories—but now that he’s beginning to hear them, he is staggered by the truth. Working with only the barest of clues, he peels back the layers of mysteries past and present, exposing the tangle of secrets at the heart of this strange community—from the deceptions of a wealthy couple to the bitterness of an ex-cop and the secrets of a lonely single mother—as a tale of rage and perversion comes full circle...then explodes in a series of violent acts and shocking twists.

‘I took the skull from its evidence bag and gently set it on the stainless steel table. ‘Tell me who you are...’

On the remote Hebridean island of Runa, a grisly discovery awaits the arrival of forensic anthropologist Dr David Hunter.

A body – almost totally incinerated but for the feet and a single hand – has been found. The local police are quick to record an accidental death but Hunter's instincts say otherwise: he’s convinced it’s murder. In fact it appears Runa is far from the peaceful community it first appears – and a burned corpse is only one of its dark secrets.

Then an Atlantic storm descends, severing all power and contact with the mainland. And as the storm rages, the killing begins in earnest...

Powerful, unpredictable and shocking, Written in Bone is the nerve-shredding new crime thriller from the No. 1 international bestselling storyteller

Simon Beckett is a freelance journalist and the author of The Chemistry of Death. He is married and lives in England, where he is at work on his next thriller featuring Dr. David Hunter.