Items related to The Water Knife: A novel 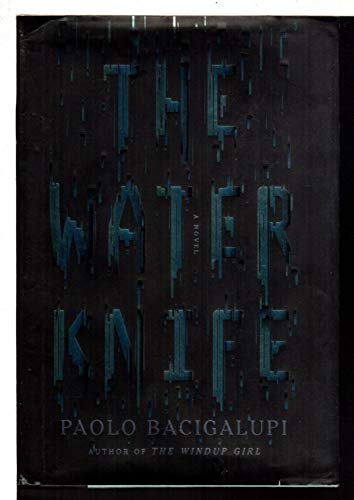 Paolo Bacigalupi, New York Times best-selling author of The Windup Girl and National Book Award finalist, delivers a near-future thriller that casts new light on how we live today—and what may be in store for us tomorrow.

The American Southwest has been decimated by drought. Nevada and Arizona skirmish over dwindling shares of the Colorado River, while California watches, deciding if it should just take the whole river all for itself. Into the fray steps Las Vegas water knife Angel Velasquez. Detective, assassin, and spy, Angel “cuts” water for the Southern Nevada Water Authority and its boss, Catherine Case, ensuring that her lush, luxurious arcology developments can bloom in the desert and that anyone who challenges her is left in the gutted-suburban dust.

When rumors of a game-changing water source surface in Phoenix, Angel is sent to investigate. With a wallet full of identities and a tricked-out Tesla, Angel arrows south, hunting for answers that seem to evaporate as the heat index soars and the landscape becomes more and more oppressive. There, Angel encounters Lucy Monroe, a hardened journalist, who knows far more about Phoenix’s water secrets than she admits, and Maria Villarosa, a young Texas migrant, who dreams of escaping north to those places where water still falls from the sky.

As bodies begin to pile up and bullets start flying, the three find themselves pawns in a game far bigger, more corrupt, and dirtier than any of them could have imagined. With Phoenix teetering on the verge of collapse and time running out for Angel, Lucy, and Maria, their only hope for survival rests in one another’s hands.  But when water is more valuable than gold, alliances shift like sand, and the only truth in the desert is that someone will have to bleed if anyone hopes to drink.

An Amazon Best Book of June 2015: Three very different characters—an orphaned Texan teen marooned in Phoenix; the “water knife” Angel from Las Vegas who will break any law he needs to in order to pave the way for his boss to gain the water rights she wants; and journalist Lucy Monroe, who has adopted drought-decimated Phoenix as her own—thrust Bacigalupi’s near-future tale through violence and betrayal toward a blockbuster conclusion that could well be one of the best endings of the year. Murder and torture are everyday events in dusty Phoenix, which is loosely controlled by a sociopathic crime lord, a Chinese construction company that’s offering the only jobs in town, Californian interests, and Las Vegas’ shadowy water knives—former criminals and ex-military who enforce the water rights bought or extorted by their powerful boss. When a rumor surfaces of water rights so senior that they would trump all existing rights and give Phoenix a chance to bloom instead of continue its rampant slide into death by drought, the race is on to find the rights, and no one will survive unharmed. Bleak, troubling, and at the same time deeply hopeful as Bacigalupi’s complex characters define and defend their loyalties, The Water Knife delivers a final scene as unexpected as it is satisfying. --Adrian Liang

PAOLO BACIGALUPI is a Hugo, Nebula, and Michael L. Printz Award winner, as well as a National Book Award finalist. He is also a winner of the Theodore Sturgeon Memorial Award, the John W. Campbell Award, and a three-time winner of the Locus Award. His short fiction has appeared in The Magazine of Fantasy & Science Fiction, Asimov’s Science Fiction Magazine, and High Country News. He lives with his wife and son in western Colorado, where he is working on a new novel.

Book Description Hardcover. Condition: New. Dust Jacket Condition: New. 1st Edition. Brand new and flawless SIGNED and DATED FIRST PRINTING with full provenance: a signed and dated event announcement with a copy of my ticket and two color photographs of the author signing my stack of books. The jacket is now encased in archival Brodart. All our books ship bundled in multiple layers of bubble wrap inside a sturdy box. Signed by Author(s). Seller Inventory # 000793