Items related to The Sixth Extinction: Patterns of Life and the Future...

Leakey, Richard E. The Sixth Extinction: Patterns of Life and the Future of Humankind

The Sixth Extinction: Patterns of Life and the Future of Humankind 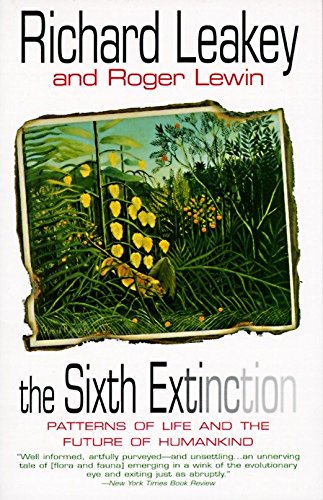 Richard Leakey, One Of The World's  Foremost Experts On Man's Evolutionary Past, Now Turns  His Eye To The Future And Doesn't Like What He  Sees.

To the philosophical the  earth is eternal, while the human race -- presumptive  keeper of the world's history -- is a mere speck  in the rich stream of life. It is known that  nothing upon Earth is forever; geography, climate, and  plant and animal life are all subject to radical  change. On five occasions in the past, catastrophic  natural events have caused mass extinctions on  Earth. But today humans stand alone, in dubious  distinction, among Earth's species: Homo  Sapiens possesses the ability to destroy  entire species at will, to trigger the sixth  extinction in the history of life. In The Sixth  Extinction, Richard Leakey and Roger Lewin  consider how the grand sprawl of human life is  inexorably wreaking havoc around the world. The  authors of Origins and  Origins Reconsidered, unimpeachable  authorities on the human fossil record, turn their  attention to the most uncharted anthropological territory  of all: the future, and man's role in defining it.  According to Leakey and Lewin, man and his  surrounding species are end products of history and  chance. Now, however, humans have the unique  opportunity to recognize their influence on the global  ecosystem, and consciously steer the outcome in order  to avoid triggering an unimaginable upheaval.

Richard Leakey is the world’s most famous living paleoanthropologist. He resigned from his position as chairman of the National Museums of Kenya when Kenya’s president, Daniel arap Moi appointed him to head the Kenya Wildlife Service. His parents were the archaeologists Louis Leakey and Mary Leakey. His half-brother is the leading plant scientist, Colin Leakey.

Roger Lewin, PhD, is a biochemist, the former deputy editor of the British magazine New Scientist, and the author of Making Waves: Irving Dardik and His Superwave Principle, as well as many other highly praised books on biology such as Complexity: Life at the Edge of Chaos and Patterns in Evolution: The New Molecular View.

Paleoanthropologist Leakey and coauthor Lewin (Origins Reconsidered, LJ 9/1/92) examine biology's traditional viewpoints, which maintain a linear progression from simple to complex species development. In this scenario, survival of the fittest means success, and species extinction indicates failure. The authors also present the current trends in evolutionary science theory suggesting that the world is shaped by mass extinctions (natural catastrophes have caused five) instead of natural selection and that the shape and behavior of biological communities is driven by chaotic interaction rather than the simplistic balance-of-nature concept. Leakey and Lewin argue that Homo sapiens is the result of many chance events in evolution rather than the foreordained culmination of evolutionary excellence. Unfortunately, our self-awareness and mental capacity has given us the dubious capability of triggering a sixth extinction, destroying entire species through overhunting and habitat destruction. As the only sentient creature among animals, we have the duty to protect all of Earth's species. The authors present a powerful message based on years of observation and fieldwork. Highly recommended for all collections.?Gloria Maxwell, Kansas Cty. P.L., Kan.
Copyright 1995 Reed Business Information, Inc.

1. The Sixth Extinction: Patterns of Life and the Future of Humankind (Paperback)

Book Description Bantam Doubleday Dell Publishing Group Inc, United States, 1996. Paperback. Condition: New. Reprint. Language: English. Brand new Book. There have been five great extinctions in the long history of life on earth, the most recent 65 million years ago, when all dinosaur species perished in an astonishingly brief period of time. Each of these great extinctions was unimaginably catastrophic - at least 65 percent of all species living vanished in a geological instant; in the Permian extinction, nearly 95 percent of all species were obliterated. The agency for these extinctions, the why, is hotly debated - sudden climate change, asteroids, evolutionary inadequacy - but the patterns are remarkably consistent. Now, as Leakey and Lewin show with inarguable logic based on irrefutable scientific evidence, the sixth great extinction is underway. And this time the cause is beyond dispute: By the lowest estimate, thirty thousand species are wiped out by human agency every year - a rate that matches the patterns of the other five great extinctions with frightening exactitude. As the authors show, such dramatic and overwhelming extinction threatens the entire complex fabric of life on earth, including the species at fault, Homo sapiens. Unless we come to realize the devastating consequence of our rapacious behavior, we will follow the mastodon, the great auk, the carrier pigeon, and our other victims into the oblivion of extinction. Seller Inventory # FLT9780385468091

2. The Sixth Extinction: Patterns of Life and the Future of Humankind

3. The Sixth Extinction: Patterns of Life and the Future of Humankind

4. The Sixth Extinction: Patterns of Life and the Future of Humankind

5. The Sixth Extinction: Patterns of Life and the Future of Humankind