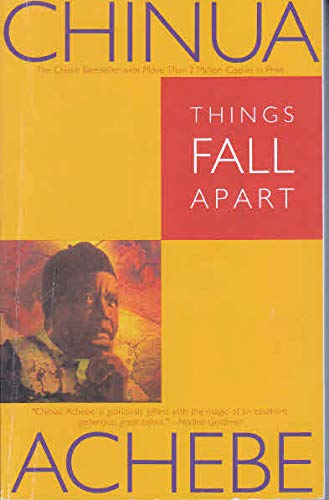 “A true classic of world literature . . . A masterpiece that has inspired generations of writers in Nigeria, across Africa, and around the world.”  —Barack Obama

Things Fall Apart is the first of three novels in Chinua Achebe's critically acclaimed African Trilogy. It is a classic narrative about Africa's cataclysmic encounter with Europe as it establishes a colonial presence on the continent. Told through the fictional experiences of Okonkwo, a wealthy and fearless Igbo warrior of Umuofia in the late 1800s, Things Fall Apart explores one man's futile resistance to the devaluing of his Igbo traditions by British political andreligious forces and his despair as his community capitulates to the powerful new order.

With more than 20 million copies sold and translated into fifty-seven languages, Things Fall Apart provides one of the most illuminating and permanent monuments to African experience. Achebe does not only capture life in a pre-colonial African village, he conveys the tragedy of the loss of that world while broadening our understanding of our contemporary realities.

One of Chinua Achebe's many achievements in his acclaimed first novel, Things Fall Apart, is his relentlessly unsentimental rendering of Nigerian tribal life before and after the coming of colonialism. First published in 1958, just two years before Nigeria declared independence from Great Britain, the book eschews the obvious temptation of depicting pre-colonial life as a kind of Eden. Instead, Achebe sketches a world in which violence, war, and suffering exist, but are balanced by a strong sense of tradition, ritual, and social coherence. His Ibo protagonist, Okonkwo, is a self-made man. The son of a charming ne'er-do-well, he has worked all his life to overcome his father's weakness and has arrived, finally, at great prosperity and even greater reputation among his fellows in the village of Umuofia. Okonkwo is a champion wrestler, a prosperous farmer, husband to three wives and father to several children. He is also a man who exhibits flaws well-known in Greek tragedy:

Okonkwo ruled his household with a heavy hand. His wives, especially the youngest, lived in perpetual fear of his fiery temper, and so did his little children. Perhaps down in his heart Okonkwo was not a cruel man. But his whole life was dominated by fear, the fear of failure and of weakness. It was deeper and more intimate than the fear of evil and capricious gods and of magic, the fear of the forest, and of the forces of nature, malevolent, red in tooth and claw. Okonkwo's fear was greater than these. It was not external but lay deep within himself. It was the fear of himself, lest he should be found to resemble his father.

And yet Achebe manages to make this cruel man deeply sympathetic. He is fond of his eldest daughter, and also of Ikemefuna, a young boy sent from another village as compensation for the wrongful death of a young woman from Umuofia. He even begins to feel pride in his eldest son, in whom he has too often seen his own father. Unfortunately, a series of tragic events tests the mettle of this strong man, and it is his fear of weakness that ultimately undoes him.

Achebe does not introduce the theme of colonialism until the last 50 pages or so. By then, Okonkwo has lost everything and been driven into exile. And yet, within the traditions of his culture, he still has hope of redemption. The arrival of missionaries in Umuofia, however, followed by representatives of the colonial government, completely disrupts Ibo culture, and in the chasm between old ways and new, Okonkwo is lost forever. Deceptively simple in its prose, Things Fall Apart packs a powerful punch as Achebe holds up the ruin of one proud man to stand for the destruction of an entire culture. --Alix Wilber

This is Chinua Achebe's classic novel, with more than two million copies sold since its first U.S. publication in 1969. Combining a richly African story with the author's keen awareness of the qualities common to all humanity, Achebe here shows that he is "gloriously gifted, with the magic of an ebullient, generous, great talent." -- Nadine Gordimer