Items related to The Brethren 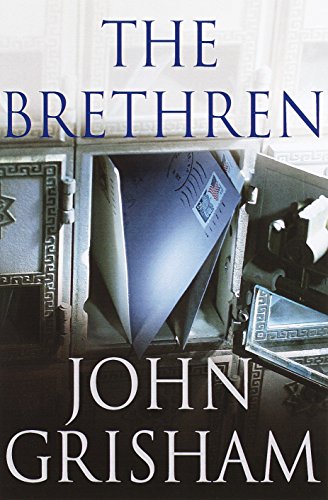 And three former judges who call themselves the Brethren: one from Texas, one from California, and one from Mississippi. They meet each day in the law library, their turf at Trumble, where they write briefs, handle cases for other inmates, practice law without a license, and sometimes dispense jailhouse justice. And they spend hours writing letters. They are fine-tuning a mail scam, and it's starting to really work. The money is pouring in.

Then their little scam goes awry. It ensnares the wrong victim, a powerful man on the outside, a man with dangerous friends, and the Brethren's days of quietly marking time are over.

John Grisham's novels have all been so systematically successful that it is easy to forget he is just one man toiling away silently with a pen, experimenting and improving with each book. While not as gifted a prose stylist as Scott Turow, Grisham is among the best plotters in the thriller business, and he infuses his books with a moral valence and creative vision that set them apart from their peers.

The Brethren is in many respects his most daring book yet. The novel grows from two separate subplots. In the first, three imprisoned ex-judges (the "brethren" in the title), frustrated by their loss of power and influence, concoct an elaborate blackmail scheme that preys on wealthy, closeted gay men. The second story traces the rise of presidential candidate Aaron Lake, a puppet essentially created by CIA director Teddy Maynard to fulfill Maynard's plans for restoring the power of his beleaguered agency.

Grisham's tight control of the two meandering threads leaves the reader guessing through most of the opening chapters how and when these two worlds will collide. Also impressive is Grisham's careful portraiture. Justice Hatlee Beech in particular is a fascinating, tragic anti-hero: a millionaire judge with an appointment for life who was rendered divorced, bankrupt, and friendless after his conviction for a drunk-driving homicide.

The book's cynical view of presidential politics and criminal justice casts a somewhat gloomy shadow over the tale. CIA director Teddy Maynard is an all-powerful demon with absolute knowledge and control of the public will and public funds. Even his candidate, Congressman Lake, is a pawn in Maynard's egomaniacal game of ad campaigns, illicit contributions, and international intrigue. In the end, The Brethren marks a transition in Grisham's career toward a more thoughtful narrative style with less interest in the big-payoff blockbuster ending. But that's not to say that the last 50 pages won't keep your reading light turned on late. --Patrick O'Kelley

This collector's edition is signed by John Grisham. Each copy is leather-bound, stamped in gold foil front and spine, has marbleized printed ends, satin ribbon marker, glassine wrap around the book, and individually slipcased in a one-piece cloth case slipcase and shrinkwrapped. Only 500 copies in print.