Items related to The Plato Papers: A Novel

The Plato Papers: A Novel 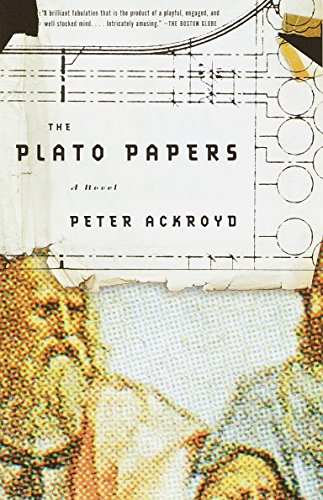 From the imagination of one of the most brilliant writers of our time and bestselling author of The Life of Thomas More, a novel that playfully imagines how the "modern" era might appear to a thinker seventeen centuries hence.

At the turn of the 38th century, London's greatest orator, Plato, is known for his lectures on the long, tumultuous history of his now tranquil city. Plato focuses on the obscure and confusing era that began in A.D. 1500, the Age of Mouldwarp. His subjects include Sigmund Freud's comic masterpiece "Jokes and Their Relation to the Subconscious," and Charles D.'s greatest novel, "The Origin of Species." He explores the rituals of Mouldwarp, and the later cult of webs and nets that enslaved the population. By the end of his lecture series, however, Plato has been drawn closer to the subject of his fascination than he could ever have anticipated. At once funny and erudite, The Plato Papers is a smart and entertaining look at how the future is imagined, the present absorbed, and the past misrepresented.

In A.D. 3700, London's greatest orator, Plato, regularly delivers bravura public lectures on the long and tumultuous history of what is now a peaceful, tranquil city, secure in the certainty of its own relationship to the past. Particularly fascinated with the dark and confused epoch known as the Age of Mouldwarp, stretching from A.D. 1500 to A.D. 2300, Plato discourses on its extraordinary figures and customs from what evidence remains. These include orations on the clown Sigmund Freud and his comic masterpiece, Jokes and their Relation to the Unconscious; the African singer George Eliot, apparently author of The Waste Land; and Charles Dickens's greatest novel, The Origin of Species. And then there's E.A. Poe--or rather, Poet:

The eminence and status of the author are not in doubt. The name, for example, was not difficult to interpret. Poe is an abbreviation of Poet, and by common consent the rest was deciphered: E. A. Poe = Eminent American Poet. It seems clear enough that the writers of America enjoyed a blessed anonymity, even in the Age of Mouldwarp. The word 'poet' is known to all of us, but as there are no chants or hymns in 'Tales and Histories' we believe the term was applied indiscriminately to all writers of that civilisation.

Plato also elaborates on the era's strange rites and rituals, including "the cult of webs and nets" that apparently covered and enslaved the population. But then in the midst of these brilliant, precise public performances, he begins a dialogue with his soul. Doubt begins to creep in (Is the past really past? And are the rituals of the present so superior?), leading him on a fateful journey.

The Plato Papers is an extraordinary novel. As with the best of Peter Ackroyd's fiction, it treads a thin line between fantasy and biography, the genre he so elegantly mastered in his now classic studies Dickens, T.S. Eliot, and The Life of Thomas More. Wise and salutary, it is a wonderfully observed satire of misprision and the arrogance of philosophical certainty. --Jerry Brotton

"Richly revealing. . . . Unlike anything else Peter Ackroyd has written. . . . A jeu d'esprit."
--The New York Times Book Review

"A lively tale and an invigorating meditation on the changelessness, after no matter how many eons, of human nature."
--Time

"A serious divertissement, a brilliant fabulation that is the product of a playful, engaged, and well-stocked mind."
--The Boston Globe

"A little book that raises some big questions. . . . You can finish it in a couple of hours. But if you read it carefully, you'll be thinking about it for days."
--Philadelphia Inquirer

"Peter Ackroyd is a visionary, as The Plato Papers makes clear. This is one of the oddest but most important and original novels to appear in many years. This masterpiece of contemporary writing will thrill and entertain readers for years to come, but it will do more than that: it will enlarge their vision, stimulating organs long forgotten and never known."
--Jay Parini, author of The Last Station and Robert Frost: A Life

"What makes The Plato Papers notable is not its fantastic invention but its intelligence...Excellently written...with a truly Socratic curiosity, making The Plato Papers a philosophical good read."
--Malcolm Bradbury, Financial Times

"Articulate, comic, wise, delicate, melancholy, exquisite. It simultaneously deconstructs the story of the past and builds its own myth. In short, this is a carefully pulsed breath of a book, with an impact that sneaks into one's dreams."
--John Clute, The Independent
"A fantastic invention--excellently written."--Malcolm Bradbury -->

1. The Plato Papers: A Prophesy

2. The Plato Papers: A Novel

3. The Plato Papers: A Novel

5. The Plato Papers: A Novel

6. THE PLATO PAPERS: A NOVEL

7. THE PLATO PAPERS: A NOVEL