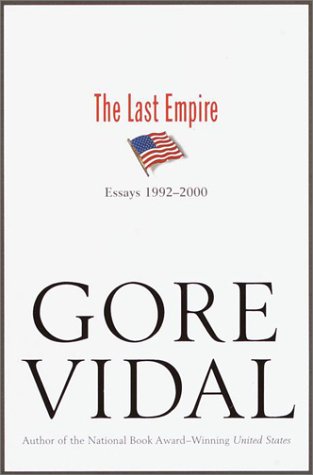 A new collection of provocative, witty and eloquent essays by Gore Vidal, the greatest living American man of letters and one of the finest essayists of the twentieth (and twenty-first) century.

The Last Empire is Gore Vidal's ninth collection of essays in the course of his distinguished literary career. As in the previous volumes, which include the 1993 National Book Award-winning United States: Essays 1952-1992, Vidal displays unparalleled range and inimitable style as he deals with matters literary, historical, personal, and political. There are warm (and shrewd) appreciations of Edmund Wilson, Dawn Powell, Sinclair Lewis, and Mark Twain; polemical observations on the major figures and (as he sees it) deplorable developments in American politics, Bill Clinton, FDR, JFK, his cousin Al Gore, the CIA and the American empire, the global reach of media conglomerates, and the United States' disdain for the UN, as well as fascinating autobiographical vignettes. Pieces that have already generated shock waves include his essay in dispraise of the works of John Updike, his controversial defense of Charles Lindbergh, and his attack on the national security state that first appeared in Vanity Fair. Nobody makes the fur fly in a more elegant and civilized fashion than Gore Vidal. He is our indispensable man.

"The American tradition of independent and curious learning is kept alive in the wit and great expressiveness of Gore Vidal's criticism."
--Citation for the 1982 National Book Critics Circle Award for Criticism

"In 114 essays written over a period of forty years, Gore Vidal has shown himself to be a masterly, learned, and percipient observer of an unparalleled range of subjects. United States: Essays 1952-1992 assesses such diverse matters as modern French fiction, the Kennedys, underappreciated writers like Thomas Love Peacock, and the American attitude toward sex. He writes tenderly of authors and people he cherishes Eleanor Roosevelt, Tennessee Williams, William Dean Howells. Whatever his subject, he addresses it with an artist's resonant appreciation, a scholar's conscience, and the persuasive powers of a great essayist."
--Citation for the 1993 National Book Award

"Gore Vidal, essayist; so good that we cannot do without him. He is a treasure of the state."
--R. W. B. Lewis, New York Times Book Review

"Gore Vidal is the master essayist of our age, and we should thank the gods that we still have him to kick us around. Long may he flourish."
Michael Dirda, Washington Post Book World

Gore Vidal is the author, most recently, of the novel The Golden Age, the concluding book in his seven-volume series of narratives of American empire. United States is being reissued simultaneously in trade paperback by Broadway Books. Vidal divides his time between Ravello, Italy, and Los Angeles.