Items related to Why Are Jews Liberals?

Podhoretz, Norman Why Are Jews Liberals?

Why Are Jews Liberals? 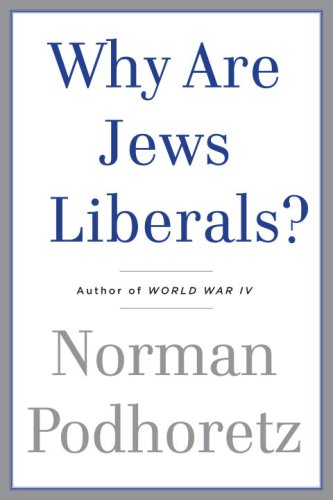 From the bestselling author of World War IV, a brilliant and provocative examination of a central question in American politics and culture that is sure to generate tremendous controversy.

Norman Podhoretz says he has never in his entire life been asked any question on any subject as often as “Why are so many Jews liberals?”-or in its more specifically political form, “Why do most Jews always vote for the Democrats?” Podhoretz proposes to solve this puzzle. He first offers a fascinating account of anti-Semitism in the West to show why, for most of that time, Jews quite sensibly concluded that they had much more to fear from the right than the left. But since the Six Day War of 1967, he argues, this position has no longer made sense, and yet most Jews go on supporting the Democratic Party and the liberal agenda. Reviewing the history of Jewish political attitudes and thoroughly examining the available evidence, he then demonstrates that all the usual explanations-such as a passion for justice allegedly deriving from the prophets of the Hebrew Bible-are either inadequate or flat-out false. Finally he proposes his own answer to the great puzzle of why most Jews remain as committed to liberalism as ever.

There is no more vigorous thinker or skilled polemicist in American intellectual life than Norman Podhoretz. In Why Are Jews Liberals? he sums up his thinking on the political inclinations of his fellow Jews-in the process confounding conventional wisdom and changing the way we view American politics.

NORMAN PODHORETZ, who was the editor in chief of Commentary for thirty-five years, is now an adjunct fellow of the Hudson Institute and the author of numerous bestselling books, including Making It, Breaking Ranks, Ex-Friends, My Love Affair with America, The Prophets, and World War IV. He holds the Presidential Medal of Freedom, the nation's highest civilian honor.

1. Why Are Jews Liberals?

2. WHY ARE JEWS LIBERALS?

3. Why Are Jews Liberals?