Items related to Curling , Canada and the Magic of ... Open House

Russell, Scott Curling , Canada and the Magic of ... Open House

Curling , Canada and the Magic of ... Open House 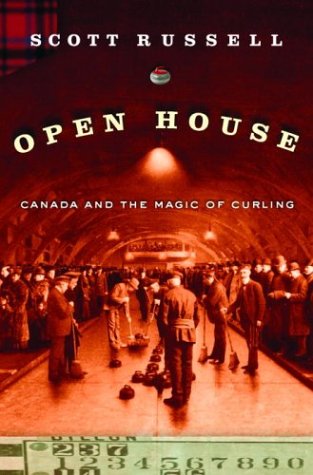 1. Open House: Canada and the Magic of Curling

Book Description Doubleday Canada Ltd, Toronto, ON, Canada, 2003. Hardcover. Condition: New. Dust Jacket Condition: New. 352 pages. Book Description: With a keen eye and ear for story, Hockey Night in Canada host and bestselling author Scott Russell chronicles a sport both exotic and familiar--curling. Canadians have a unique enthusiasm for curling. It transcends barriers. World-class athletes curl with absolute beginners, and grandmothers and grandsons take to the ice together. There are more than a million registered curlers in anada, and millions more tune in to watch curling events on television. The outpouring of emotion that followed Sandra Schmirler s death revealed that curlers are counted among our national heroes. Curling doesn t offer the excitement of other winter sports--no thunderous body checks, no vertical leaps, no million-dollar superstars. But when Scott Russell visited curling clubs across the country, attended the Brier in Calgary and the Olympic games in Salt Lake City, and spent time with curlers, from celebrities like Colleen Jones to the unsung father, uncle and son-team who built the Eagle Hill Curling Club in Alberta, he discovered the magical allure of curling. As Canadian Olympic gold medalist Joan McCusker said of curling s appeal: Ordinary people doing extraordinary things is the attraction. Open House takes us inside the world of curling, and captures the spirit and lore of the sport, the dedication and passion of its participants. From the Back Cover tightly paced love letter to the sport of curling. The Hamilton Spectator Scott Russell s conversations with junior curlers, broadcasters, volunteer ice makers, world champions, faithful fans, curling heroes and legends reveal an abundance of passion and Canadian character. [He] found a sense of family and belonging as he walked through the open door of the curling world. Joan McCusker, Olympic Gold Medallist and CBC Curling Commentator How often, though, has curling really been given its due? .There have been no poets laureate for the roaring game, no Ken Drydens or Roy MacGregors to explain where it fits in the na. Seller Inventory # 0002288

2. CURLING , CANADA AND THE MAGIC O