Items related to The Story of Edgar Sawtelle

The Story of Edgar Sawtelle 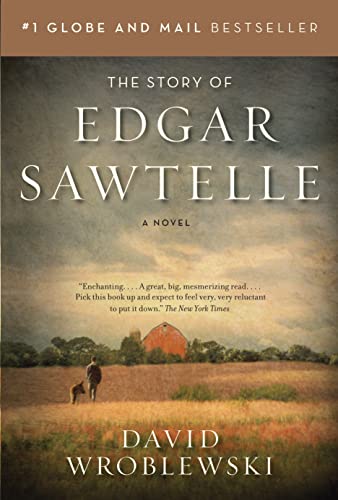 Beautifully written and elegantly paced, The Story of Edgar Sawtelle is a coming-of-age novel about the power of the land and the past to shape our lives. It is a riveting tale of retribution, inhabited by empathic animals, prophetic dreams, second sight, and vengeful ghosts.

Born mute, Edgar Sawtelle feels separate from the people around him but is able to establish profound bonds with the animals who share his home and his name: his family raises a fictional breed of exceptionally perceptive and affable dogs. Soon after his father's sudden death, Edgar is stunned to learn that his mother has already moved on as his uncle Claude quickly becomes part of their lives. Reeling from the sudden changes to his quiet existence, Edgar flees into the forests surrounding his Wisconsin home accompanied by three dogs. Soon he is caught in a struggle for survival — the only thing that will prepare him for his return home.

Amazon Best of the Month, June 2008: It's gutsy for a debut novelist to offer a modern take on Hamlet set in rural Wisconsin--particularly one in which the young hero, born mute, communicates with people, dogs, and the occasional ghost through his own mix of sign and body language. But David Wroblewski's extraordinary way with language in The Story of Edgar Sawtelle immerses readers in a living, breathing world that is both fantastic and utterly believable. In selecting for temperament and a special intelligence, Edgar's grandfather started a line of unusual dogs--the Sawtelles--and his sons carried on his work. But among human families, undesirable traits aren't so easily predicted, and clashes can erupt with tragic force. Edgar's tale takes you to the extremes of what humans must endure, and when you're finally released, you will come back to yourself feeling wiser, and flush with gratitude. And you will have remembered what magnificent alchemy a finely wrought novel can work. --Mari Malcolm

Born mute, speaking only in sign, Edgar Sawtelle leads an idyllic life with his parents on their farm in remote northern Wisconsin. For generations, the Sawtelles have raised and trained a fictional breed of dog whose thoughtful companionship is epitomized by Almondine, Edgar's lifelong friend and ally. But with the unexpected return of Claude, Edgar's paternal uncle, turmoil consumes the Sawtelles' once peaceful home. When Edgar's father dies suddenly, Claude insinuates himself into the life of the farm--and into Edgar's mother's affections.

Grief-stricken and bewildered, Edgar tries to prove Claude played a role in his father's death, but his plan backfires--spectacularly. Forced to flee into the vast wilderness lying beyond the farm, Edgar comes of age in the wild, fighting for his survival and that of the three yearling dogs who follow him. But his need to face his father's murderer and his devotion to the Sawtelle dogs turn Edgar ever homeward.

David Wroblewski is a master storyteller, and his breathtaking scenes--the elemental north woods, the sweep of seasons, an iconic American barn, a fateful vision rendered in the falling rain--create a riveting family saga, a brilliant exploration of the limits of language, and a compulsively readable modern classic.

We write the stories we wish we could read. There's no other reason to do it, to spend years pacing around your basement, mumbling, pecking at a keyboard, turning your back on a world that offers such a feast of delicious fruits. The Story of Edgar Sawtelle came about because some time ago I wished I could read a novel about a boy and his dog, one that integrated our contemporary knowledge of canine behavior, cognition, and origins with my experience of living with dogs; if possible, something flavored with the uncynical Midwestern sense of heart and purpose so familiar from my childhood (and something which, in truth, I've spent much my adult life being slightly ashamed of, as if either heart or purpose were embarrassing attributes for a grown-up to display). I'd recently come to know a good dog, maybe the best dog I'd ever met, and the subject of people and dogs and ethics and character suddenly seemed urgent. But when I went looking for such a story, I had to go back almost a hundred years, back to Jack London's Call of the Wild. That was a surprise. A little while after that, an idea for a story came to me--not the whole thing, but enough to start.

"I flat-out loved The Story of Edgar Sawtelle, and spent twelve happy evenings immersed in the world David Wroblewski has created. As I neared the end, I kept finding excuses to put the book aside for a little, not because I didn't like it, but because I liked it too much; I didn't want it to end. Dog-lovers in particular will find themselves riveted by this story, because the canine world has never been explored with such imagination and emotional resonance. Yet in the end, this isn't a novel about dogs or heartland America--although it is a deeply American work of literature. It's a novel about the human heart, and the mysteries that live there, understood but impossible to articulate. Yet in the person of Edgar Sawtelle, a mute boy who takes three of his dogs on a brave and dangerous odyssey, Wroblewski does articulate them, and splendidly. I closed the book with that regret readers feel only after experiencing the best stories: It's over, you think, and I won't read another one this good for a long, long time.

In truth, there's never been a book quite like The Story of Edgar Sawtelle. I thought of Hamlet when I was reading it, and Watership Down, and The Night of the Hunter, and The Life of Pi--but halfway through, I put all comparisons aside and let it just be itself.

I'm pretty sure this book is going to be a bestseller, but unlike some, it deserves to be. It's also going to be the subject of a great many reading groups, and when the members take up Edgar, I think they will be apt to stick to the book and forget the neighborhood gossip.

Wonderful, mysterious, long and satisfying: readers who pick up this novel are going to enter a richer world. I envy them the trip. I don't re-read many books, because life is too short. I will be re-reading this one."

David Wroblewski grew up in rural Wisconsin, not far from the Chequamegon National Forest where the novel is set. He earned an MFA from the Warren Wilson MFA Program for Writers. This is his first novel.
From the Hardcover edition.

1. The Story of Edgar Sawtelle

2. THE STORY OF EDGAR SAWTELLE