Items related to Atonement: A Novel 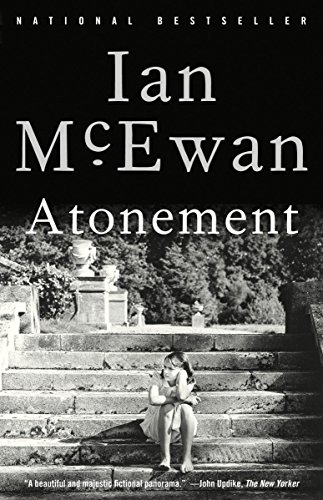 Ian McEwan’s symphonic novel of love and war, childhood and class, guilt and forgiveness provides all the satisfaction of a brilliant narrative and the provocation we have come to expect from this master of English prose.

On a hot summer day in 1935, thirteen-year-old Briony Tallis witnesses a moment’s flirtation between her older sister, Cecilia, and Robbie Turner, the son of a servant and Cecilia’s childhood friend. But Briony’ s incomplete grasp of adult motives–together with her precocious literary gifts–brings about a crime that will change all their lives. As it follows that crime’s repercussions through the chaos and carnage of World War II and into the close of the twentieth century, Atonement engages the reader on every conceivable level, with an ease and authority that mark it as a genuine masterpiece.

Ian McEwan's Booker Prize-nominated Atonement is his first novel since Amsterdam took home the prize in 1998. But while Amsterdam was a slim, sleek piece, Atonement is a more sturdy, more ambitious work, allowing McEwan more room to play, think, and experiment.

We meet 13-year-old Briony Tallis in the summer of 1935, as she attempts to stage a production of her new drama "The Trials of Arabella" to welcome home her older, idolized brother Leon. But she soon discovers that her cousins, the glamorous Lola and the twin boys Jackson and Pierrot, aren't up to the task, and directorial ambitions are abandoned as more interesting prospects of preoccupation come onto the scene. The charlady's son, Robbie Turner, appears to be forcing Briony's sister Cecilia to strip in the fountain and sends her obscene letters; Leon has brought home a dim chocolate magnate keen for a war to promote his new "Army Ammo" chocolate bar; and upstairs, Briony's migraine-stricken mother Emily keeps tabs on the house from her bed. Soon, secrets emerge that change the lives of everyone present....

The interwar, upper-middle-class setting of the book's long, masterfully sustained opening section might recall Virginia Woolf or Henry Green, but as we move forward--eventually to the turn of the 21st century--the novel's central concerns emerge, and McEwan's voice becomes clear, even personal. For at heart, Atonement is about the pleasures, pains, and dangers of writing, and perhaps even more, about the challenge of controlling what readers make of your writing. McEwan shouldn't have any doubts about readers of Atonement: this is a thoughtful, provocative, and at times moving book that will have readers applauding. --Alan Stewart, Amazon.co.uk

“A tour de force. . . . Every bit as affecting as it is gripping.” --Michiko Kakutani, The New York Times

“Luminous. . . . Atonement is brilliant and like nothing he’s ever written before.” –Newsweek

“Brilliant. . . . McEwan could be the most psychologically astute writer working today, our era’s Jane Austen.” –Esquire

“A work of astonishing depth and humanity.” –The Economist

“His most complete and passionate book to date.” --The New York Times Book Review
“In the seriousness of its intentions and the dazzle of its language, Atonement made me starry-eyed all over again on behalf of literature’s humanizing possibilities.” –Daphne Merkin, Los Angeles Times

“McEwan is technically at the height of his powers.” –The New York Review of Books

“Enthralling. . . . With psychological insight and a command of sensual and historical detail, Mr. McEwan creates an absorbing fictional world.” –The Wall Street Journal

“[Atonement] hauls a defining part of the British literary tradition up to and into the 21st century.” –The Guardian

“McEwan is one of the most gifted literary storytellers alive. . . . [Atonement] implants in the memory a living, flaming presence.” –James Wood, The New Republic

“A masterpiece of moral inquiry. . . . Beautiful and wrenching.” –New York

“A first-rate novel on any scale. . . . His most expansive and ambitious book. . . . Few, if any, novelists writing today match McEwan in ingenuity and plotting.” –Milwaukee Journal Sentinel

“Magnificent. . . . McEwan forces his readers to turn the pages with greater dread and anticipation than does perhaps any other ‘literary’ writer working in English today.” –Claire Messud, The Atlantic Monthly

“The extraordinary range of Atonement suggests that there’s nothing McEwan can’t do.” –The Christian Science Monitor

“Magically readable. . . . Never has McEwan shown himself to be more in sympathy with the vulnerability of the human heart.” –Sunday Times (London)

“Not since the 19th century has a writer stepped in and out of his characters’ minds with such unfettered confidence.” –The Plain Dealer

“A novel of artistry, power and truth that puts it among the most extraordinary works of fiction of the last decade. . . . It is, quite simply, magnificent–a masterpiece.” –Michael Pakenham, The Baltimore Sun

“Magical. . . . A love story, a war story, and a story about stories, and so it hits the heart, the guts and the brain.” –The New York Observer

“Luminous. . . . McEwan’s writing has often made me blink, but never before blink with emotion. . . . [McEwan] is at one with his talent.” –Robert Cremins, Houston Chronicle

“Atonement can’t be laid down once it’s been picked up. . . . [McEwan] can write rings around most others writing in English today.” –The Weekly Standard