Items related to The Prokaryotes, Vol. 5: Proteobacteria: Alpha and... 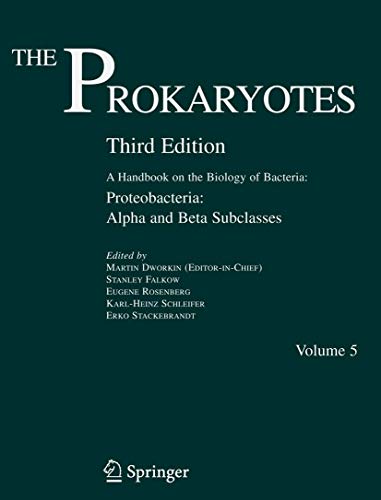 The revised Third Edition of The Prokaryotes, acclaimed as a classic reference in the field, offers new and updated articles by experts from around the world on taxa of relevance to medicine, ecology and industry. Entries combine phylogenetic and systematic data with insights into genetics, physiology and application. Existing entries have been revised to incorporate rapid progress and technological innovation. The new edition improves on the lucid presentation, logical layout and abundance of illustrations that readers rely on, adding color illustration throughout. Expanded to seven volumes in its print form, the new edition adds a new, searchable online version.

The first edition of The Prokaryotes, published in 1981, took a bold step to become the most comprehensive and authoritative encyclopedic handbook on prokaryotes. Another important step was taken with the second edition in 1992, when the chapters were organized on the basis of the molecular phylogeny as a rational, evolutionary basis for the taxonomy of the prokaryotes. By then, the two volumes of the first edition had expanded to four. With the decision to publish the handbook electronically, the third edition was the boldest step of all. The advantages were obvious and persuasive: essentially unlimited space, no restrictions on the use of color, and the inclusion of film and animated illustrations. Nevertheless, the affection for a printed handbook was highly underestimated and during the first 5 years of the continuously evolving online version, a growing demand for a new print edition was voiced by the scientific and corporate community. Thus, Springer is now publishing a third edition in printed form. In total, 7 volumes will make up this new fully revised and updated version. Compared to the second edition, this edition will contain 85% new contents, printed in color throughout. It will be ideally suited for research centers in academia and in the corporate world that need reliable and up-to-date information on the biology of the prokaryotic organisms.