Items related to Introduction to Mechanics and Symmetry: A Basic Exposition...

Introduction to Mechanics and Symmetry: A Basic Exposition of Classical Mechanical Systems (Texts in Applied Mathematics) 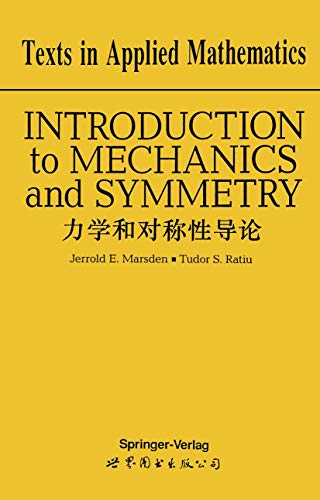 Mathematics is playing an ever more important role in the physical and biological sciences. provoking a blurring of boundaries between scientific dis­ ciplines and a resurgence of interest in the modern as well as the classical techniques of applied mathematics. This renewal of interest, both in research and teaching, has led to the establishment of the series: Texts in Applied Mathe­ matics (TAM). The development of new courses is a natural consequence of a high level of excitement on the research frontier as newer techniques, such as numerical and symbolic computer systems, dynamical systems, and chaos, mix with and reinforce the traditional methods of applied mathematics. Thus, the purpose of this textbook series is to meet the current and future needs of these advances and encourage the teaching of new courses. TAM will publish textbooks suitable for use in advanced undergraduate and beginning graduate courses, and will complement the Applied Mathematical Siiences (AMS) series, which will focus on advanced textbooks and research level monographs. Preface Symmetry and mechanics have been close partners since the time of the founding masters, namely, Newton, Euler, Lagrange, Laplace, Poisson, Ja­ cobi, and Hamilton, and its subsequent developers, including Noether, Rie­ mann, Routh, Kelvin, Poincare, and Cartan. To this day, symmetry has continued to playa strong role, especially with the modern work of Arnold, Guillemin, Kirillov, Kostant, Moser, Smale, Souriau, Sternberg, and many others.

"The book is self-contained.It remains a good and solid introduction to this subject."
Nieuw Archief voor Wiskunde, March 2001 "... This book takes the reader on one of the greatest journeys in modern mathematics that has as its roots a subject that is more than 300 years old. Armed with this knowledge a reader is ready to pursue numerous topics of active mathematical research, from the more pure domains of symplectic geometry and topology to the geometric analysis of the limitless supply of examples from mechanics."
Newsletter of the Newzealand Mathematical Society, No. 81, April 2001

Introduction to Mechanics and Symmetry

"As the name of the book implies, a consistent theme running through the book is that of symmetry. Indeed the latter half of the book focuses on Poisson manifolds, momentum maps, Lie-Poisson reduction, co-adjoint orbits and the integrability of the rigid body. The discussion of reduction must be the most comprehensive yet given. A pleasant feature of the book is that most of the theory that relates to finite-dimensional mechanical systems is illustrated concretely in terms of local coordinates, thereby making the book accessible even to beginners in the field."―MATHEMATICAL REVIEWS

1. Introduction to Mechanics and Symmetry: A Basic Exposition of Classical Mechanical Systems (Texts in Applied Mathematics)

Book Description Springer, 1994. Condition: Good. A+ Customer service! Satisfaction Guaranteed! Book is in Used-Good condition. Pages and cover are clean and intact. Used items may not include supplementary materials such as CDs or access codes. May show signs of minor shelf wear and contain limited notes and highlighting. Seller Inventory # 0387943471-2-4

3. Introduction to Mechanics and Symmetry: A Basic Exposition of Classical Mechanical Systems (Texts in Applied Mathematics)

Shipping: US$ 13.28
From United Kingdom to U.S.A.
Destination, rates & speeds