Items related to The Deep Hot Biosphere: The Myth of Fossil Fuels

The Deep Hot Biosphere: The Myth of Fossil Fuels 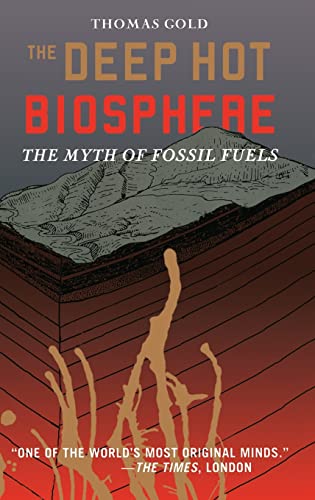 Suppose someone claimed that we are not running out of petroleum? Or that life on Earth began below the surface of our planet? Or that oil and gas are not "fossil fuels"? Or that if we find extraterrestrial life it is likely to be within, not on, other planets? You might expect to hear statements like these from an author of science fiction. But what if they came from a renowned physicist, an indisputably brilliant scientist who has been called "one of the world's most original minds"? In the The Deep Hot Biosphere, Thomas Gold sets forth truly controversial and astonishing theories about where oil and gas come from, and how they acquire their organic "signatures." The conclusions he reaches in this book might be at first difficult to believe, but they are supported by a growing body of evidence, and by the indisputabel stature and seriousness Gold brings to any scientific enterprise. In this book we see a brilliant and boldly orginal thinker, increasingly a rarity in modern science, as he developes a revolutionary new view about the fundamental workings of our planet. Thomas Gold is a member of the National Academy of Sciences, a Fellow of the Royal Society, and an Emertius Professor at Cornell University. Regarded as one of the most creative and wide-ranging scientists of his generation, he has taughtat Cambridge University and Harvard, and for 20 years was the Director of the Cornell Center for Radiophysics and Space Research.

Thomas Gold is one of the most wide-ranging distinguished scientists of the 20th century. A member of Britain's Royal Society and the U.S. National Academy of Sciences, he has made important discoveries in physiology (theory of hearing), astrophysics (theory of pulsars), cosmology (steady-state theory), and a theory of time, as well as the revolutionary contributions to geology and biology which appear in this book. He initiated the Space Sciences Program at Cornell University, where he now serves as Professor Emeritus.

The creatures that we see living on the surface are only a small part of the biosphere. The greater and more ancient part of the biosphere is deep and hot.....Gold's theories are always original, always important, usually controversial and usually right. It is my belief, based on fifty years of observation of Gold as a friend and colleague, that the deep hot biosphere is all of the above: original, important, controversial and right (From Freeman Dyson's Foreword to The Deep Hot Biosphere).

3. The Deep Hot Biosphere: The Myth of Fossil Fuels

4. The Deep Hot Biosphere: The Myth of Fossil Fuels

5. THE DEEP HOT BIOSPHERE: THE MYTH