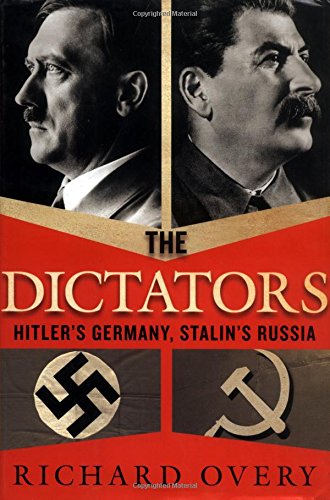 An analytical study of the dictatorships of Hitler and Stalin discusses their public images in comparison with their private personalities, their ascents to power, their creations of extermination camps and the Soviet Gulag, and the massive wars that marked their rules. 13,000 first printing.

Richard Overy is professor of history at King's College, London. His many acclaimed books on World War II include Why the Allies Won and The Battle of Britain.

Comparisons between Hitler and Stalin and their regimes are nothing new, but this dense, comprehensive, scholarly investigation is more nuanced than most. Overy sidesteps the simplistic debate over which dictator was more evil and focuses on how they, and the systems they created, were similar and different. He delves into their regimes thematically, in topics ranging from police states and economic systems to wartime behavior. The results yield intriguing historical insights, although the book demands a careful reading. For instance, Overy notes that both Hitler and Stalin created cults of personality, but for Hitler "personality was the defining criterion of leadership"; Stalin, on the other hand, emphasized Communist ideology first and embraced a personality cult only when he realized it could cement his stranglehold on power. Interestingly, while the Nazi Party increasingly relied on workers' support and ideology, Stalin's Communist Party—the "vanguard of the proletariat"—relied more and more on middle-class technocrats. At times Overy restates points long known to historians, e.g., both leaders pursued negative utopias, but from different bases: class warfare was Stalin's justification, while Hitler chose biological purity. But when he points out the differences in their policies toward minorities and nationalities—Hitler adhered to a racial ladder, while Stalin, a Georgian, flip-flopped to suit his political goals—Overy's analytical strength and depth of knowledge emerges. 32 pages illus.; maps.
Copyright © Reed Business Information, a division of Reed Elsevier Inc. All rights reserved.