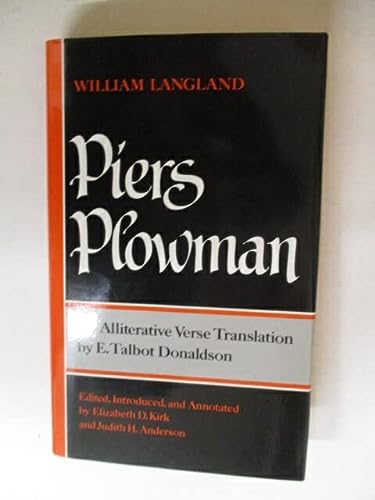 A translation of the 14th century poem, which offers a picture of society in the late Middle Ages on the threshold of the early modern world. The translator of this work was a founding editor of "The Norton Anthology of English Literature".

E. Talbot Donaldson wrote in his first book on Piers Plowman that Langland 'in his emphasis on the individual...was in advance of his own church and of his own nation--and, indeed, of himself.' Paradoxically, as Donaldson also recognized, Langland was 'a political and religious moderate' whose cast of mind was 'conservative and traditionalist.' The poem that resulted from this curious paradox presents one of the great enigmas of all English poetry, as well as one of the major works of the Middle Ages.

E. Talbot Donaldson was Distinguished Professor of English Emeritus at Indiana University. His books include Piers Plowman: The C-Text and Its Poets, Chaucer s Poetry: An Anthology for the Modern Reader, and, with George Kane, the definitive edition of Piers Plowman: The B Version. He was a founding editor of The Norton Anthology of English Literature.