Items related to The Really Short Poems of A.R. Ammons

Ammons, A. R. The Really Short Poems of A.R. Ammons 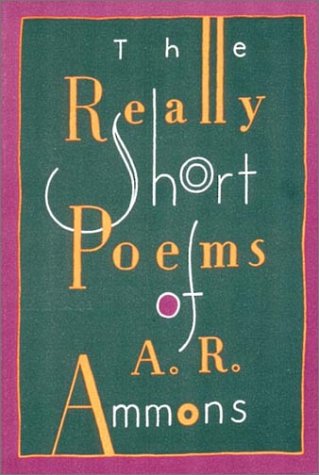 Few, if any, collections of poems by a major poet have ever demonstrated more forcefully than this one that brevity is the soul of wit. The Really Short Poems of A.R. Ammon's brings together some 160 short poems, spanning Ammon's whole career, ranging from mordantly funny paradoxes to intensely compressed instants of lyric perception. Each one demonstrates the transcendent qualities of intellect and craft that have made A.R. Ammon's among the most honoured American poets today. They comprise a uniquely entertaining volume that makes his genius accessible to a new generation of readers.

These short pieces frequently combine the discipline and precision of haiku with the assured and humorous tone of cracker-barrel philosophy. Ammons, who has been known to have plenty to say, cuts to the heart of the matter in poem after poem, suggesting worlds of unspoken wisdom and humor. "Success Story" is a good example of the project, as Ammons explains why he never "got on good" with the rest of the world: "First I had nothing / the world wanted / then the world had / nothing I wanted."