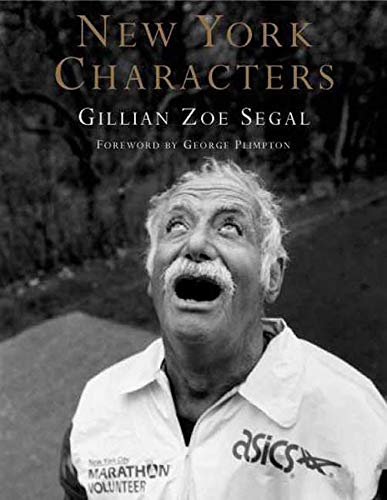 A celebration of the personalities that make New York City unique.

Every year millions of people flock to New York City, drawn to its unparalleled theaters, museums, restaurants, and sights. While much has been written about these topics, one of the city's greatest attractions has gone largely unheralded: its characters. Among the masses, there are some who stand out from the crowd, a special group of New Yorkers who give the city its flavor and make it a vibrant, exciting, and unique place. New York Characters is a tribute to these people. Celebrated in both photographs and words, Gillian Zoe Segal's subjects include neighborhood fixtures, prominent celebrities, famous personalities, and the truly eccentric. Among the extraordinary New Yorkers you'll meet are Guardian Angel founder Curtis Sliwa; Ken Krisses, the president of the Coney Island Polar Bear Club; the "real" Kramer, on whom the Seinfeld character is based; sports fanatics Dancin' Larry and Fireman Ed; restaurateurs Elaine Kaufman and Sylvia Woods; Dr. Jonathan Zizmor, the "subway" dermatologist; and Jimmy Breslin, the legendary newspaperman. Segal has photographed sixty-six such characters in their own distinctive environments. Accompanying the striking portraits are colorful profiles of each individual. The foreword by George Plimpton, a "New York character" himself, is a tribute to Segal's extraordinary work and her fascinating collection of New Yorkers.

George Plimpton was an American journalist, actor, editor, and writer. Well-known for helping to found The Paris Review and for his sports writing, Plimpton died from natural causes in 2003.

lenty of books feature New York City's famous landmarks, but what about the Big Apple's famous or notorious, or merely interesting citizens? Former mayor Ed Koch, Carlyle Hotel crooner Bobby Short, bearded lady Jennifer Miller, Chinatown's Egg Cake Lady and The Oldest Cabbie are just a few of the folks Gillian Zoe Segal highlights in her book of photographs and biographical sketches, New York Characters. It's not a comprehensive gathering ("Woody Allen dissed me and I got in a fight with the "Soup Nazi," she writes), but that's part of its charm: after all; a unique city deserves a quirky cross-section. All author proceeds from the sale of this book will go to the families of the victims of the terrorist attacks of Sept. 11. Foreword by George Plimpton.