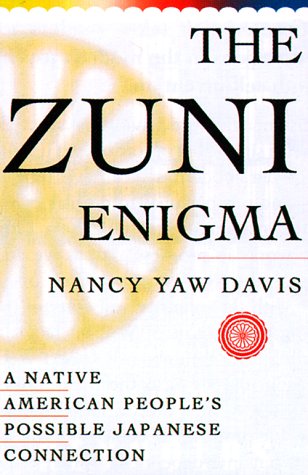 Argues that the Zuni Indians of New Mexico exhibit unique cultural, linguistic, and biological traits due to the merging of Native Americans and Japanese settlers into one tribe in the mid-1300s.

Nancy Yaw Davis holds an M.A. from the University of Chicago and a Ph.D. in anthropology from the University of Washington. Author of numerous articles, she has long researched the history and cultures of the native peoples of North America. Her company, Cultural Dynamics, is located in Anchorage, Alaska, where she lives.

The peaceful Zuni of New Mexico and Arizona are much studied, partly because their language, culture and physical appearance set them apart from other Native American peoples. Davis, an anthropologist who has made 10 visits to the Zuni pueblo, now offers the startling thesis that a group of Japanese Buddhists left earthquake-wracked medieval Japan and came by ship to the Southern California coast, eventually migrating inland to the Zuni territory, where they merged their culture and genes with Native Americans to produce the modern Zuni people around A.D. 1350. Davis uses "forensic" evidence--including analyses of dental morphology, blood and skeletal remains--to support a Japanese-Zuni connection. Further, she notes the Zuni's exceptionally high incidence of a specific kidney disease that is also unusually common in Japan. Yet she acknowledges there have been no DNA studies to confirm or refute her hypothesis, and she has not turned up a single 13th-century Japanese item in North America. Her bold, highly speculative theory gets a boost from some cultural parallels, including striking similarities between the Zuni and Japanese languages; between the Zuni "sacred rosette" found on robes and pottery and the Japanese Buddhist chrysanthemum symbol (presently Japan's imperial crest). A Zuni mid-January ceremony with masked monsters, aimed at frightening children into proper behavior, is almost identical to one in Japan. Davis's broader thesis that the Pacific was a "liquid highway" mounts a serious challenge to the entrenched idea of the peopling of the Americas solely via the Bering Strait land bridge. Open-minded readers will enjoy her beautifully written book as an opportunity to ponder our shared humanity. Illus.
Copyright 2000 Reed Business Information, Inc.

5. THE ZUNI ENIGMA : A NATIVE AMERI