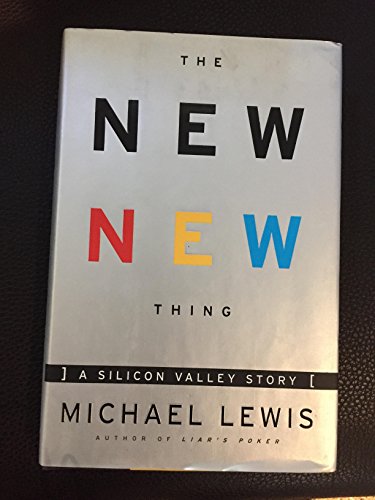 In the weird glow of the dying millennium, Michael Lewis sets out on a safari through Silicon Valley to find the world's most important technology entrepreneur, the man who embodies the spirit of the coming age. He finds him in Jim Clark, who is about to create his third, separate, billion-dollar company: first Silicon Graphics, then Netscape-which launched the Information Age-and now Healtheon, a startup that may turn the $1 trillion healthcare industry on its head.

Despite the variety of his achievements, Clark thinks of himself mainly as the creator of Hyperion, which happens to be a sailboat . . . not just an ordinary yacht, but the world's largest single-mast vessel, a machine more complex than a 747. Clark claims he will be able to sail it via computer from his desk in San Francisco, and the new code may contain the seeds of his next billion-dollar coup.

On the wings of Lewis's celebrated storytelling, the reader takes the ride of a lifetime through this strange landscape of geeks and billionaires. We get the inside story of the battle between Netscape and Microsoft; we sit in the room as Clark tries to persuade the investment bankers that Healtheon is the next Microsoft; we get queasy as Clark pits his boat against the rage of the North Atlantic in winter. And in every brilliant anecdote and character sketch, Lewis is drawing us a map of markets and free enterprise in the twenty-first century.

Michael Lewis was supposed to be writing about how Jim Clark, the founder of Silicon Graphics and Netscape, was going to turn health care on its ear by launching Healtheon, which would bring the vast majority of the industry's transactions online. So why was he spending so much time on a computerized yacht, each feature installed because, as one technician put it, "someone saw it on Star Trek and wanted one just like it?"

Much of The New New Thing, to be fair, is devoted to the Healtheon story. It's just that Jim Clark doesn't do startups the way most people do. "He had ceased to be a businessman," as Lewis puts it, "and become a conceptual artist." After coming up with the basic idea for Healtheon, securing the initial seed money, and hiring the people to make it happen, Clark concentrated on the building of Hyperion, a sailboat with a 197-foot mast, whose functions are controlled by 25 SGI workstations (a boat that, if he wanted to, Clark could log onto and steer--from anywhere in the world). Keeping up with Clark proves a monumental challenge--"you didn't interact with him," Lewis notes, "so much as hitch a ride on the back of his life"--but one that the author rises to meet with the same frenetic energy and humor of his previous books, Liar's Poker and Trail Fever.

Like those two books, The New New Thing shows how the pursuit of power at its highest levels can lead to the very edges of the surreal, as when Clark tries to fill out an investment profile for a Swiss bank, where he intends to deposit less than .05 percent of his financial assets. When asked to assess his attitude toward financial risk, Clark searches in vain for the category of "people who sought to turn ten million dollars into one billion in a few months" and finally tells the banker, "I think this is for a different ... person." There have been a lot of profiles of Silicon Valley companies and the way they've revamped the economy in the 1990s--The New New Thing is one of the first books fully to depict the sort of man that has made such companies possible. --Ron Hogan

Michael Lewis is the best-selling author of Liar’s Poker, Moneyball, The Blind Side, The Big Short, and The Undoing Project. He lives in Berkeley, California, with his wife and three children.