Items related to Impounded: Dorothea Lange and the Censored Images of... 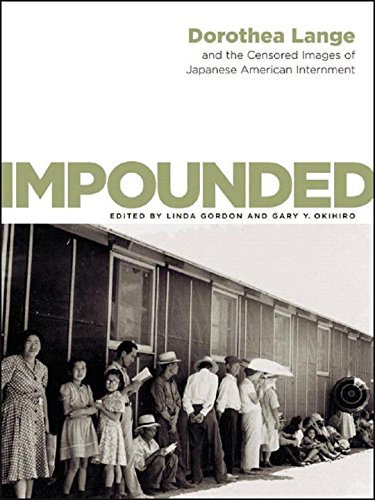 Censored by the U.S. Army, Dorothea Lange's unseen photographs are the extraordinary photographic record of the Japanese American internment saga.

This indelible work of visual and social history confirms Dorothea Lange's stature as one of the twentieth century's greatest American photographers. Presenting 119 images originally censored by the U.S. Army―the majority of which have never been published―Impounded evokes the horror of a community uprooted in the early 1940s and the stark reality of the internment camps. With poignancy and sage insight, nationally known historians Linda Gordon and Gary Okihiro illuminate the saga of Japanese American internment: from life before Executive Order 9066 to the abrupt roundups and the marginal existence in the bleak, sandswept camps. In the tradition of Roman Vishniac's A Vanished World, Impounded, with the immediacy of its photographs, tells the story of the thousands of lives unalterably shattered by racial hatred brought on by the passions of war.

Linda Gordon, winner of two Bancroft Prizes and the Los Angeles Times Book Prize, is the author of The Second Coming of the KKK, Dorothea Lange and Impounded, and the coauthor of Feminism Unfinished. She is the Florence Kelley Professor of History at New York University and lives in New York and Madison, Wisconsin.

Gary Y. Okihiro is the author of Whispered Silences: Japanese Americans and World War II and Common Ground: Reimagining American History. He is a professor at Columbia University and lives in New York City.

When America's War Relocation Authority hired Dorothea Lange to photograph the internment of Japanese-Americans in 1942, they put a few restrictions on her work. Barbed wire, watchtowers and armed soldiers were off limits, they declared. And no pictures of resistance, either. They wanted the roundup and sequestering of Japanese-Americans documented—but not too well. Working within these limits, Lange, who is best known for her photographs of migrant farmers during the Depression, nonetheless produced images whose content so opposed the federal objective of demonizing Japanese-Americans that the vast majority of the photographs were suppressed throughout WWII (97% of them have never been published at all). Editors Gordon and Okihiro set this first collection of Lange's internment work within technical, cultural and historical contexts. Gordon (The Great Arizona Orphan Abduction) discusses Lange's professional methods and the formation of her "democratic-populist" beliefs. Okihiro (Whispered Silences: Japanese Americans and World War II) traces the history of prejudice against Japanese Americans, with emphasis on internees' firsthand accounts. But the bulk of the book is given over to Lange's photographs. Several of these are as powerful as her most stirring work, and the final image—of a grandfather in the desolate Manzanar Center looking down in anguish at the grandson between his knees—is worth the price of the book alone. 104 photos, 2 maps. (Nov.)
Copyright © Reed Business Information, a division of Reed Elsevier Inc. All rights reserved.