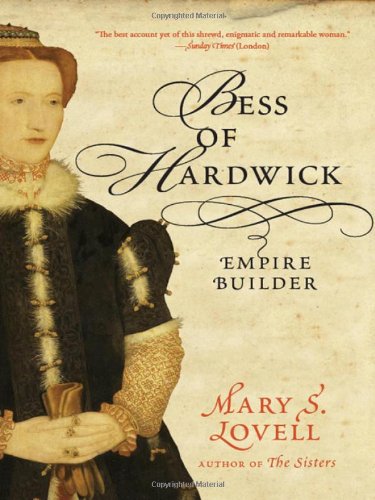 From the author of The Sisters, a chronicle of the most brutal, turbulent, and exuberant period of England's history.

Bess Hardwick, the fifth daughter of an impoverished Derbyshire nobleman, did not have an auspicious start in life. Widowed at sixteen, she nonetheless outlived four monarchs, married three more times, built the great house at Chatsworth, and died one of the wealthiest and most powerful women in English history.

In 1527 England was in the throes of violent political upheaval as Henry VIII severed all links with Rome. His daughter, Queen Mary, was even more capricious and bloody, only to be followed by the indomitable and ruthless Gloriana, Elizabeth I. It could not have been more hazardous a period for an ambitious woman; by the time Bess's first child was six, three of her illustrious godparents had been beheaded.

Using journals, letters, inventories, and account books, Mary S. Lovell tells the passionate, colorful story of an astonishingly accomplished woman, among whose descendants are counted the dukes of Devonshire, Rutland, and Portland, and, on the American side, Katharine Hepburn.

Mary S. Lovell has written many best-selling biographies, among them The Sisters, about the Mitford family, and Straight on Till Morning, about Beryl Markham. She lives in England.

Born into the minor nobility, Bess of Hardwick rose to become one of the wealthiest and most powerful women in England, second only to Queen Elizabeth I. Lovell (The Mitford Girls) presents Bess's life as a study in how education, connections, marriage and property management shaped the life of women in the 16th century. Bess served in noble and royal households at key points in the tumultuous years of Henry VIII and his three children, helping her fourth husband guard Mary, Queen of Scots, and raising her own granddaughter Arbella Stuart with aspirations to England's throne. Becoming a successful manager in partnership with her second husband, William Cavendish, she built up properties and incomes through the rest of her life. Lovell assumes that Bess had a charm that drew people to her, yet it's hard to sense that personality in this account. The reader is repeatedly taken away from Bess by background stories, including a variety of court matters and detailed accounts of the Scottish queen and the career of Bess's somewhat obscure third husband. Family squabbles over property and incomes and the spectacular breakdown of her marriage to the Earl of Shrewsbury dominate the latter part of the book. While all these elements give a good sense of the times, Bess herself is only beginning to emerge on her own. B&w illus. (Apr.)
Copyright © Reed Business Information, a division of Reed Elsevier Inc. All rights reserved.