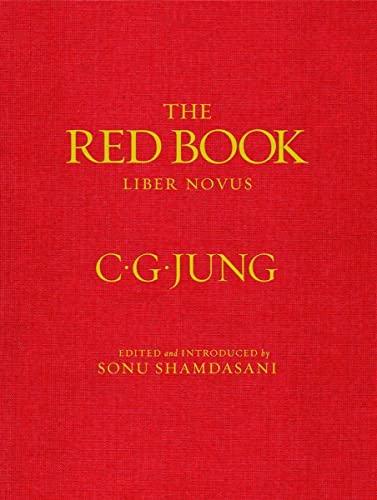 The most influential unpublished work in the history of psychology. When Carl Jung embarked on an extended self-exploration he called his “confrontation with the unconscious,” the heart of it was The Red Book, a large, illuminated volume he created between 1914 and 1930. Here he developed his principle theories—of the archetypes, the collective unconscious, and the process of individuation—that transformed psychotherapy from a practice concerned with treatment of the sick into a means for higher development of the personality.

While Jung considered The Red Book to be his most important work, only a handful of people have ever seen it. Now, in a complete facsimile and translation, it is available to scholars and the general public. It is an astonishing example of calligraphy and art on a par with The Book of Kells and the illuminated manuscripts of William Blake. This publication of The Red Book is a watershed that will cast new light on the making of modern psychology.
212 color illustrations.

Sonu Shamdasani, a preeminent Jung historian, is Reader in Jung History at Wellcome Trust Centre for the History of Medicine at University College London. He lives in London, England.

Book Description WW Norton & Co, United States, 2010. Hardback. Condition: New. Language: English. Brand new Book. "The years, of which I have spoken to you, when I pursued the inner images, were the most important time of my life. Everything else is to be derived from this. It began at that time, and the later details hardly matter anymore. My entire life consisted in elaborating what had burst forth from the unconscious and flooded me like an enigmatic stream and threatened to break me. That was the stuff and material for more than only one life. Everything later was merely the outer classification, the scientific elaboration, and the integration into life. But the numinous beginning, which contained everything, was then." These are the words of the psychologist C. G. Jung in 1957, referring to the decades he worked on The Red Book from 1914 to 1930. Although its existence has been known for more than eighty years, The Red Book was never published or made available to the wide audience of Jung's students and followers. Nothing less than the central book of Jung's oeuvre, it is being published now in a full facsimile edition with a contextual essay and notes by the noted Jung scholar Sonu Shamdasani and translated by Mark Kyburz, John Peck and Sonu Shamdasani. It will now be possible to study Jung's self-experimentation through primary documentation rather than fantasy, gossip and speculation, and to grasp the genesis of his later work. For nearly a century, such a reading has simply not been possible, and the vast literature on his life and work has lacked access to the single most important document. This publication opens the possibility of a new era in understanding Jung's work. It provides a unique window into how he recovered his soul and constituted a psychology. It is possibly the most influential hitherto unpublished work in the history of psychology. This exact facsimile of The Red Book reveals not only an extraordinary mind at work but also the hand of a gifted artist and calligrapher. Interspersed among more than two hundred lovely illuminated pages are paintings whose influences range from Europe, the Middle East and the Far East to the native art of the new world. The Red Book, much like the handcrafted "Books of Hours" from the Middle Ages, is unique. Both in terms of its place in Jung's development and as a work of art, its publication is a landmark. Seller Inventory # AAC9780393065671

Book Description W. W. Norton & Company, 2009. Hardcover. Condition: New. 1st. Hardcover. The most influential unpublished work in the history of psychology. When Carl Jung embarked on an extended self-exploration he called his confrontation with the unconscious, the heart .Shipping may be from multiple locations in the US or from the UK, depending on stock availability. 404 pages. 4.110. Seller Inventory # 9780393065671

Shipping: US$ 35.34
From United Kingdom to U.S.A.
Destination, rates & speeds