Items related to City of Ambition: FDR, La Guardia, and the Making of...

Williams, Mason B. City of Ambition: FDR, La Guardia, and the Making of Modern New York

City of Ambition: FDR, La Guardia, and the Making of Modern New York 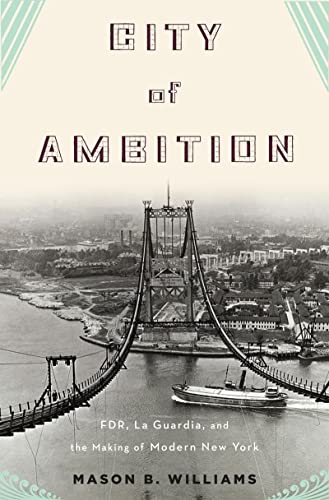 Two political titans forge a modern city and a vibrant public sector in this history of strong leadership at a time of national crisis.

City of Ambition is a brilliant history of the New Deal and its role in the making of modern New York City. The story of a remarkable collaboration between Franklin Roosevelt and Fiorello La Guardia, this is a case study in creative political leadership in the midst of a devastating depression. Roosevelt and La Guardia were an odd couple: patrician president and immigrant mayor, fireside chat and tabloid cartoon, pragmatic Democrat and reform Republican. But together, as leaders of America’s two largest governments in the depths of the Great Depression, they fashioned a route to recovery for the nation and the master plan for a great city.

Roosevelt and his “Brain Trust”―shrewd, energetic advisors such as Harold Ickes and Harry Hopkins―sought to fight the Depression by channeling federal resources through America’s cities and counties. La Guardia had replaced Tammany Hall cronies with policy experts, such as the imperious Robert Moses, who were committed to a strong public sector. The two leaders worked closely together. La Guardia had a direct line of communication with FDR and his staff, often visiting Washington carrying piles of blueprints. Roosevelt relied on the mayor as his link to the nation’s cities and their needs. The combination was potent. La Guardia’s Gotham became a laboratory for New Deal reform. Roosevelt’s New Deal transformed city initiatives into major programs such as the Works Progress Administration, which changed the physical face of the United States. Together they built parks, bridges, and schools; put the unemployed to work; and strengthened the Progressive vision of government as serving the public purpose.

Today everyone knows the FDR Drive as a main route to La Guardia Airport. The intersection of steel and concrete speaks to a pair of dynamic leaders whose collaboration lifted a city and a nation. Here is their story.

Mason B. Williams is a historian specializing in urban politics with degrees from Columbia University and Princeton University. He lives in Charlottesville, Virginia. This is his first book.

“This illuminating study offers a fresh vantage from which to comprehend key features of the New Deal and the history of New York. Moving between a vibrant portrayal of persons and incisive accounts of processes, City of Ambition is written with verve and imagination.”
- Ira Katznelson, author of Fear Itself: The New Deal and the Origins of Our Time

“An excellent account―well written and thoroughly researched―of how FDR and La Guardia, in an era of depression and war, channeled federal resources into crisis-ridden municipalities. Williams’s recounting of their achievement is a salutary reminder of what was once possible, and could be again.”
- Mike Wallace, coauthor of Gotham: A History of New York City to 1898

“An extraordinary book. In telling the story of how Roosevelt and La Guardia―men as fascinating as they were powerful―forged a mighty political collaboration, it brilliantly reinterprets the New Deal from the vantage point of the nation’s greatest city. It also marks the remarkable debut of a gifted young historian.”
- Sean Wilentz, author of The Rise of American Democracy

1. City of Ambition: FDR, La Guardia, and the Making of Modern New York

2. City of Ambition: FDR, LaGuardia, and the Making of Modern New York

3. City of Ambition: FDR, La Guardia, and the Making of Modern New York