Items related to The Norton Anthology of American Literature (Ninth... 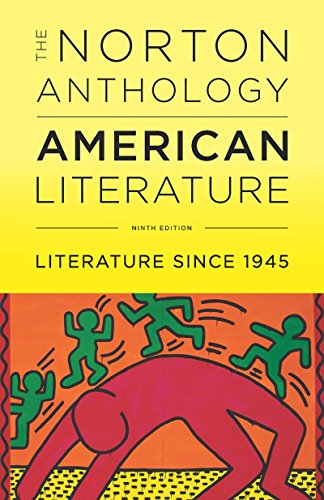 A responsive, refreshed, and media-rich revision of the market-leading anthology of American literature.

The most-trusted anthology for complete works, balanced selections, and helpful editorial apparatus, The Norton Anthology of American Literature features a cover-to-cover revision. The Ninth Edition introduces new General Editor Robert Levine and three new-generation editors who have reenergized the volume across the centuries. Fresh scholarship, new authors―with an emphasis on contemporary writers―new topical clusters, and a new ebook make the Norton Anthology an even better teaching tool and an unmatched value for students.

Robert S. Levine (Ph.D. Stanford) is Distinguished University Professor of English and Distinguished Scholar-Teacher at the University of Maryland, College Park. He is the author of Conspiracy and Romance: Studies in Brockden Brown, Cooper, Hawthorne, and Melville; Martin Delany, Frederick Douglass, and the Politics of Representative Identity; and Dislocating Race and Nation: Episodes in Nineteenth-Century American Literary Nationalism. He has edited a number of books, including The Cambridge Companion to Herman Melville; Martin R. Delany: A Documentary Reader; Hemispheric American Studies; and a Norton Critical Edition of Hawthorne’s The House of the Seven Gables.

Michael A. Elliott (Editor, 1865–1914) Ph.D. Columbia, is Professor of English and American Studies at Emory University. He is the author of The Culture Concept: Writing and Difference in the Age of Realism and Custerology: The Enduring Legacy of the Indian Wars and George Armstrong Custer. He is also the co-editor of two additional books: The American Novel, 1865-1940 (Volume 6 of the Oxford History of the Novel in English) and American Literary Studies: A Methodological Reader.

Sandra M. Gustafson (Editor, Beginnings to 1820), Ph.D. University of California at Berkeley, is Professor of English and American Studies at the University of Notre Dame. She is the author of Imagining Deliberative Democracy in the Early American Republic and Eloquence Is Power: Oratory and Performance in Early America and co-editor of Cultural Narratives: Textuality and Performance in American Culture before 1900. Since 2008 she has edited the MLA-affiliated journal Early American Literature. She is a faculty affiliate of Notre Dame's Center for Civil and Human Rights and a faculty fellow at the Kroc Institute for International Peace Studies.

Amy Hungerford (Editor, Literature Since 1945), Ph.D. Johns Hopkins, is Professor of English and American Studies and Director of the Division of the Humanities at Yale University. She is a scholar of twentieth-and twenty-first-century American literature and the author of The Holocaust of Texts: Genocide, Literature, and Personification; Postmodern Belief: American Literature and Religion Since 1960; and, most recently, Making Literature Now. She is a founder of the Post45 collective and site editor of the group's open access journal on post-1945 American literature and culture (post45.org).

Mary Loeffelholz (Ph.D. Yale) is Professor of English and Vice Provost for Academic Affairs at Northeastern University. She is the author of Dickinson and the Boundaries of Feminist Theory; Experimental Lives: Women and Literature, 1900–1945; and, most recently, From School to Salon: Reading Nineteenth-Century American Women’s Poetry. With Martha Nell Smith, she edited the Blackwell Companion to Emily Dickinson. Her essays have appeared in such journals as American Literary History, English Literary History, the Yale Journal of Criticism, and Modern Language Quarterly.

Book Description Condition: New. This is a brand new book! Fast Shipping - Safe and Secure Mailer - Our goal is to deliver a better item than what you are hoping for! If not we will make it right!. Seller Inventory # 1XGJHR000C2A_ns

8. The Norton Anthology Of American Literature: Literature Since 1945