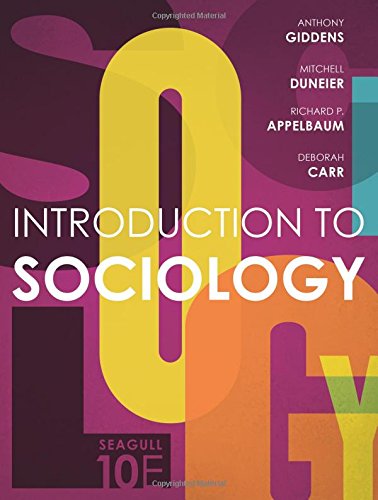 An affordable, no-nonsense introduction to sociology for today’s students.

Introduction to Sociology focuses only on what students need to know in order to master the sociological concepts taught in the introductory course. Each chapter in the Tenth Edition follows the same consistent four-part structure: First, the authors introduce the basic concepts before discussing sociological theory. They then turn their attention to current research and finally wrap up by exploring unanswered questions that face sociologists today. This consistent, thoughtful organization―coupled with learning objectives, Concept Checks, and Big Picture concept maps―keeps students focused on the core concepts. Now supported by InQuizitive, the Tenth Edition builds on the book’s long-standing strengths: emphasis on linking micro and macro sociology, coverage of the best recent research, and an exceptionally affordable price relative to other comprehensive texts.

Anthony Giddens, former director of the London School of Economics and a current member of the House of Lords, is a world-renowned social theorist who has written over forty books. He has written on just about every major topic in sociology but is best known for his work on modernization theory and globalization.

Mitchell Duneier is an award-winning urban ethnographer at Princeton University and the City University of New York Graduate Center. He is most famous for his book Sidewalk, which won the Los Angeles Times Book Prize. Duneier's research focuses on the urban poor and other groups in the margins of society.

Richard P. Appelbaum, the MacArthur chair of Global Studies at the University of California, Santa Barbara, has won several awards for his teaching and works mainly on globalization and labor issues. Appelbaum is the coauthor of Behind the Label.

Deborah Carr is a demographer and an active teacher at Rutgers University, where she regularly teaches the intro course. Her work focuses on sociology of the life course, aging, social psychology, and gender. Carr's latest book, Worried Sick: How Stress Hurts Us and How to Bounce Back, looks at how stress gets under our skin, makes us sick, and how and why people cope with stress differently.