Items related to Civilization and Its Discontents (The Standard Edition)... 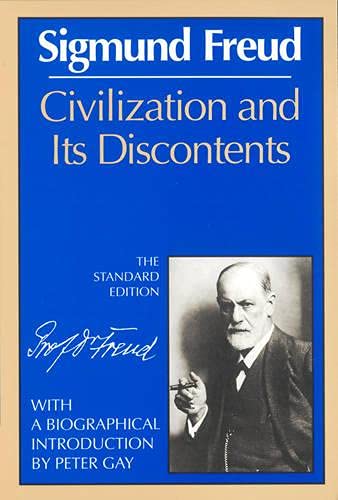 During the summer of 1929, Freud worked on what became this seminal volume of twentieth-century thought.

It stands as a brilliant summary of the views on culture from a psychoanalytic perspective that he had been developing since the turn of the century. It is both witness and tribute to the late theory of mind―the so-called structural theory, with its stress on aggression, indeed the death drive, as the pitiless adversary of eros.

Civilization and Its Discontents is one of the last of Freud's books, written in the decade before his death and first published in German in 1929. In it he states his views on the broad question of man's place in the world, a place Freud defines in terms of ceaseless conflict between the individual's quest for freedom and society's demand for conformity.

Freud's theme is that what works for civilization doesn't necessarily work for man. Man, by nature aggressive and egotistical, seeks self-satisfaction. But culture inhibits his instinctual drives. The result is a pervasive and familiar guilt.

Of the various English translations of Freud's major works to appear in his lifetime, only one was authorized by Freud himself: The Standard Edition of the Complete Psychological Works of Sigmund Freud under the general editorship of James Strachey.

Freud approved the overall editorial plan, specific renderings of key words and phrases, and the addition of valuable notes, from bibliographical and explanatory. Many of the translations were done by Strachey himself; the rest were prepared under his supervision. The result was to place the Standard Edition in a position of unquestioned supremacy over all other existing versions.

Sigmund Freud (1856-1939) is one of the twentieth century's greatest minds and the founder of the psychoanalytic school of psychology. His many works include The Ego and the Id; An Outline of Psycho-Analysis; Inhibitions; Symptoms and Anxiety; New Introductory Lectures on Psycho-Analysis; Civilization and Its Discontent, and others.

Peter Gay (1923―2015) was the author of more than twenty-five books, including the National Book Award winner The Enlightenment, the best-selling Weimar Culture, and the widely translated Freud: A Life for Our Time.

“Newly designed in a uniform format, each new paperback in the Standard Edition opens with a biographical essay on Freud's life and work―along with a note on the individual volume”
- Peter Gay, Sterling Professor of History at Yale