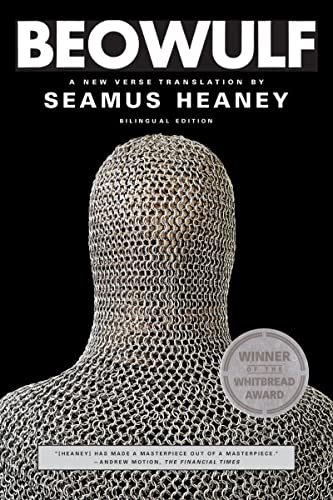 Composed toward the end of the first millennium, Beowulf is the elegiac narrative of the adventures of Beowulf, a Scandinavian hero who saves the Danes from the seemingly invincible monster Grendel and, later, from Grendel's mother. He then returns to his own country and dies in old age in a vivid fight against a dragon. The poem is about encountering the monstrous, defeating it, and then having to live on in the exhausted aftermath. In the contours of this story, at once remote and uncannily familiar at the beginning of the twenty-first century, Nobel laureate Seamus Heaney finds a resonance that summons power to the poetry from deep beneath its surface. Drawn to what he has called the "four-squareness of the utterance" in Beowulf and its immense emotional credibility, Heaney gives these epic qualities new and convincing reality for the contemporary reader.

In Beowulf warriors must back up their mead-hall boasts with instant action, monsters abound, and fights are always to the death. The Anglo-Saxon epic, composed between the 7th and 10th centuries, has long been accorded its place in literature, though its hold on our imagination has been less secure. In the introduction to his translation, Seamus Heaney argues that Beowulf's role as a required text for many English students obscured its mysteries and "mythic potency." Now, thanks to the Irish poet's marvelous recreation (in both senses of the word) under Alfred David's watch, this dark, doom-ridden work gets its day in the sun.

There are endless pleasures in Heaney's analysis, but readers should head straight for the poem and then to the prose. (Some will also take advantage of the dual-language edition and do some linguistic teasing out of their own.) The epic's outlines seem simple, depicting Beowulf's three key battles with the scaliest brutes in all of art: Grendel, Grendel's mother (who's in a suitably monstrous snit after her son's dismemberment and death), and then, 50 years later, a gold-hoarding dragon "threatening the night sky / with streamers of fire." Along the way, however, we are treated to flashes back and forward and to a world view in which a thane's allegiance to his lord and to God is absolute. In the first fight, the man from Geatland must travel to Denmark to take on the "shadow-stalker" terrorizing Heorot Hall. Here Beowulf and company set sail:

Men climbed eagerly up the gangplank,
sand churned in the surf, warriors loaded
a cargo of weapons, shining war-gear
in the vessel's hold, then heaved out,
away with a will in their wood-wreathed ship.
Over the waves, with the wind behind her
and foam at her neck, she flew like a bird...

After a fearsome night victory over march-haunting and heath-marauding Grendel, our high-born hero is suitably strewn with gold and praise, the queen declaring: "Your sway is wide as the wind's home, / as the sea around cliffs." Few will disagree. And remember, Beowulf has two more trials to undergo.

Heaney claims that when he began his translation it all too often seemed "like trying to bring down a megalith with a toy hammer." The poem's challenges are many: its strong four-stress line, heavy alliteration, and profusion of kennings could have been daunting. (The sea is, among other things, "the whale-road," the sun is "the world's candle," and Beowulf's third opponent is a "vile sky-winger." When it came to over-the-top compound phrases, the temptations must have been endless, but for the most part, Heaney smiles, he "called a sword a sword.") Yet there are few signs of effort in the poet's Englishing. Heaney varies his lines with ease, offering up stirring dialogue, action, and description while not stinting on the epic's mix of fate and fear. After Grendel's misbegotten mother comes to call, the king's evocation of her haunted home may strike dread into the hearts of men and beasts, but it's a gift to the reader:

A few miles from here
a frost-stiffened wood waits and keeps watch
above a mere; the overhanging bank
is a maze of tree-roots mirrored in its surface.
At night there, something uncanny happens:
the water burns. And the mere bottom
has never been sounded by the sons of men.
On its bank, the heather-stepper halts:
the hart in flight from pursuing hounds
will turn to face them with firm-set horns
and die in the wood rather than dive
beneath its surface. That is no good place.

In Heaney's hands, the poem's apparent archaisms and Anglo-Saxon attitudes--its formality, blood-feuds, and insane courage--turn the art of an ancient island nation into world literature. --Kerry Fried About the Author:

Seamus Heaney (1939―2013) was an Irish poet, playwright, translator, lecturer and recipient of the 1995 Nobel Prize in Literature. Born at Mossbawn farmhouse between Castledawson and Toomebridge, County Derry, he resided in Dublin until his death.