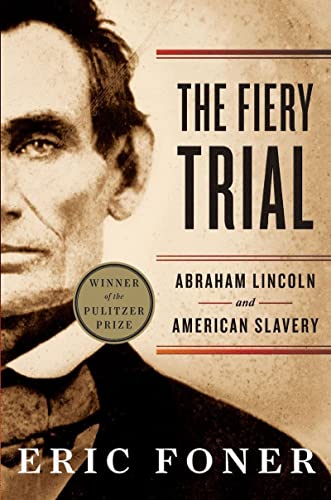 “A masterwork [by] the preeminent historian of the Civil War era.”―Boston Globe

Selected as a Notable Book of the Year by the New York Times Book Review, this landmark work gives us a definitive account of Lincoln's lifelong engagement with the nation's critical issue: American slavery. A master historian, Eric Foner draws Lincoln and the broader history of the period into perfect balance. We see Lincoln, a pragmatic politician grounded in principle, deftly navigating the dynamic politics of antislavery, secession, and civil war. Lincoln's greatness emerges from his capacity for moral and political growth. 16 pages of black-and-white illustrations; 3 maps

ADVANCE PRAISE FOR THE FIERY TRIAL: "While many thousands of books deal with Lincoln and slavery, Eric Foner has written the definitive account of this crucial subject, illuminating in a highly original and profound way the interactions of race, slavery, public opinion, politics, and Lincoln's own character that led to the wholly improbable uncompensated emancipation of some four million slaves. Even seasoned historians will acquire fresh and new perspectives from reading The Fiery Trial." --David Brion Davis, Sterling Professor of History Emeritus, Yale University, author of Inhuman Bondage: The Rise and Fall of Slavery in the New World "Definitive and breathtaking: with dazzling clarity and authority, demonstrating a total command of his sources and a sense of moral justice that transcends history, Foner has done nothing less than provide the most persuasive book ever written on Lincoln's vital place in the fight for freedom in America. This volume stands alone in the field. It is not only the best account ever written on the subject; henceforth, it should be regarded as the only account." --Harold Holzer, author of Lincoln President-Elect "Eric Foner has done it again. The Fiery Trial explores the pivotal subject of Lincoln and slavery free from the mists of hagiography and the muck of denigration. With his usual stylish mastery, Foner advances enlightened debate over our greatest president, the origins and unfolding of the Civil War, and the abolition of southern slavery. His book marks an auspicious intellectual beginning to the sesquicentennial of the American Iliad." --Sean Wilentz, author of The Rise of American Democracy: Jefferson to Lincoln

Eric Foner is the pre-eminent historian of the Civil War era. His teaching and scholarship have shaped our understanding of that pivotal period. His books have garnered every major award, including the Pulitzer Prize for The Fiery Trial, his study of Lincoln and American slavery. The DeWitt Clinton Professor Emeritus of History at Columbia University, he also writes frequently for the Nation and other major periodicals. He lives in New York City.

Book Description Paperback. Condition: New. 1st. Paperback. Selected as a Notable Book of the Year by the New York Times Book Review, this landmark work gives us a definitive account of Lincoln's lifelong engagement with the nation's critical issue.Shipping may be from multiple locations in the US or from the UK, depending on stock availability. 426 pages. 0.426. Seller Inventory # 9780393340662

10. The Fiery Trial and#8211; Abraham Lincoln and American Slavery