Items related to How Humans Evolved 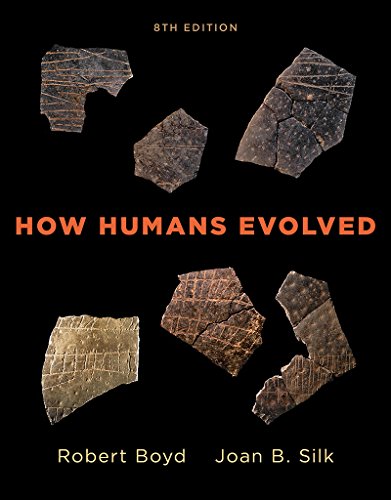 The most complete introduction to the science of human evolution.

With a signature blend of evolutionary theory, population genetics, and behavioral ecology, How Humans Evolved teaches the science and history behind human evolution. Thoroughly updated with coverage of recent research and new discoveries, the Eighth Edition offers the most visual, dynamic, and effective learning tools in its field. The Eighth Edition also includes an expanded suite of animations that help students better visualize and understand tricky concepts, as well as real-world videos and InQuizitive adaptive learning.

Robert Boyd has written widely on evolutionary theory, focusing especially on the evolution of cooperation and the role of culture in human evolution. His book Culture and the Evolutionary Process received the J. I. Staley Prize, and he has also published numerous articles in scientific journals and edited volumes. Boyd is currently the Origins Professor in the School of Evolution and Social Change at Arizona State University.

Joan B. Silk has conducted extensive research on the social lives of monkeys and apes, including extended fieldwork on chimpanzees at Gombe Stream Reserve in Tanzania and on baboons in Kenya and Botswana. She is also interested in the application of evolutionary thinking to human behavior. She has published numerous articles in scientific journals and edited volumes. She is currently a professor in the School of Evolution and Social Change at Arizona State University.