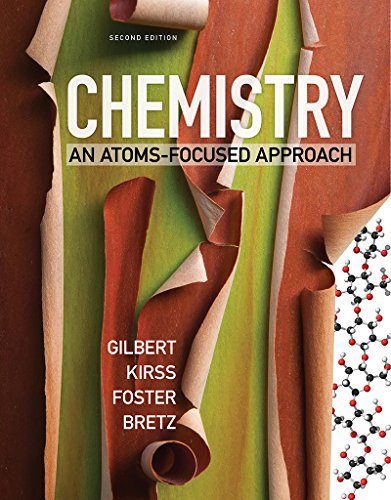 Not just Atoms-First, Atoms-Focused. An atoms-first text and media program that goes beyond a reorganization of topics, emphasizes the particulate nature of matter throughout the book, art, and problems, and helps students develop their molecular visualization skills as they learn to become expert problem-solvers.

The Second Edition's new co-author, Stacey Lowery Bretz, uses visualization tools―based on Chemistry Education Research, and focused on the particulate nature of matter―to help students self-assess what they know before, during, and after each chapter. Smartwork5 allows instructors to use this pedagogy as a diagnostic, and students receive hints and answer-specific feedback within the text. New ChemTour Animations support visualization at a molecular level, and are integrated throughout the media package.

Thomas R. Gilbert has a BS in chemistry from Clarkson and a PhD in analytical chemistry from MIT. After 10 years with the Research Department of the New England Aquarium in Boston, he joined the faculty of Northeastern University, where he is currently associate professor of chemistry and chemical biology. His research interests are in chemical and science education. He teaches general chemistry and science education courses and conducts professional development workshops for K–12 teachers. He has won Northeastern’s Excellence in Teaching Award and Outstanding Teacher of First-Year Engineering Students Award. He is a fellow of the American Chemical Society and in 2012 was elected to the ACS Board of Directors.

Rein V. Kirss received both a BS in chemistry and a BA in history as well as an MA in chemistry from SUNY Buffalo. He received his PhD in inorganic chemistry from the University of Wisconsin, Madison, where the seeds for this textbook were undoubtedly planted. After two years of postdoctoral study at the University of Rochester, he spent a year at Advanced Technology Materials, Inc., before returning to academics at Northeastern University in 1989. He is an associate professor of chemistry with an active research interest in organometallic chemistry.

Natalie Foster is emeritus professor of chemistry at Lehigh University in Bethlehem, Pennsylvania. She received a BS in chemistry from Muhlenberg College and MS, DA, and PhD degrees from Lehigh University. Her research interests included studying poly(vinyl alcohol) gels by NMR as part of a larger interest in porphyrins and phthalocyanines as candidate contrast enhancement agents for MRI. She taught both semesters of the introductory chemistry class to engineering, biology, and other nonchemistry majors and a spectral analysis course at the graduate level. She is the recipient of the Christian R. and Mary F. Lindback Foundation Award for distinguished teaching.

Stacey Lowery Bretz is a University Distinguished Professor in the Department of Chemistry and Biochemistry at Miami University in Oxford, Ohio. She earned her BA in chemistry from Cornell University, MS from the Pennsylvania State University, and a PhD in chemistry education research (CER) from Cornell University. Stacey then spent one year at the University of California, Berkeley as a post-doc in the Department of Chemistry. Her research expertise includes the development of assessments to characterize chemistry misconceptions and measure learning in the chemistry laboratory. Of particular interest is method development with regard to the use of multiple representations (particulate, symbolic, and macroscopic) to generate cognitive dissonance, including protocols for establishing the reliability and validity of these measures. She has been honored with both of Miami University's highest teaching awards: the E. Phillips Knox Award for Undergraduate Teaching in 2009 and the Distinguished Teaching Award for Excellence in Graduate Instruction and Mentoring in 2013. In 2015, she was honored as Chemist of the Year by the ACS Concinnati Local Section.

Shipping: US$ 13.97
From United Kingdom to U.S.A.
Destination, rates & speeds