Items related to The Norton Reader with 2016 MLA Update (Fourteenth... 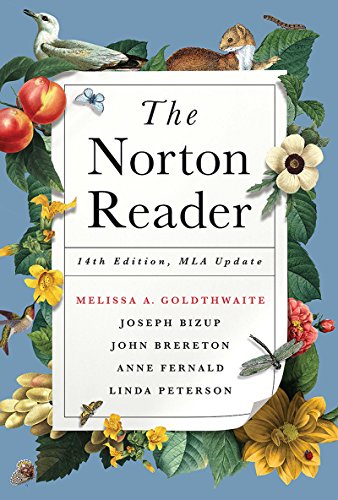 THIS TITLE HAS BEEN UPDATED TO REFLECT THE 2016 MLA UPDATE.

The classic reader that has introduced millions of students to the essay as a genre.

The Norton Reader features the largest and most diverse collection of essays, from classic to contemporary―155 in the Full edition, 95 in the Shorter. With 60 new essays almost all written in the last decade, a new ebook option, and a unique companion website that makes the book searchable by theme, genre, rhetorical mode, author, keyword―and more, the Fourteenth Edition is ideal for today’s composition classes.

Melissa A. Goldthwaite (Ph.D., The Ohio State University), General Editor, is Professor of English at Saint Joseph’s University, where she teaches composition, creative writing, and rhetorical theory. Her books include Books That Cook: The Making of a Literary Meal (New York University Press, 2014), The Norton Pocketbook of Writing by Students (2010), Surveying the Literary Landscapes of Terry Tempest Williams (University of Utah Press, 2003), and The St. Martin’s Guide to Teaching Writing (Bedford/St. Martin’s, 2003, 2008, 2014).

Joseph Bizup (Ph.D., Indiana University) is an Associate Professor of English and Director of the College of Arts & Sciences Writing Program at Boston University. He previously taught and directed writing programs at Yale University and Columbia University in the City of New York. His scholarly interests include nineteenth-century literature, especially nonfiction prose, and writing studies, especially genre, style, and argumentation.

John Brereton (Ph.D., Rutgers University) is a Professor of English, Emeritus, at the University of Massachusetts, Boston. Previously he served as Executive Director of the Calderwood Writing Initiative at the Boston Athenaum. He has taught writing at Harvard University, Wayne State University, Brandeis University, and the City University of New York. His scholarship focuses on the history of teaching English literature and composition.

Anne Fernald (Ph.D., Yale University) is Professor of English and Women's Studies at Fordham University, where she directs the first-year writing program at the Lincoln Center campus. She is the author of Virginia Woolf: Feminism and the Reader (Palgrave, 2006) and editor of the Cambridge University Press edition of Mrs. Dalloway (2014). Her scholarship focuses on modernist women writers, feminist theory, and the essay.

Linda Peterson (Ph.D., Brown University) was Professor of English at Yale University and was published widely on nonfiction prose, notably life-writing and women's authorship. She co-directed the Bass Writing Program at Yale for twenty-five years and served as president of the Council of Writing Program Administrators.