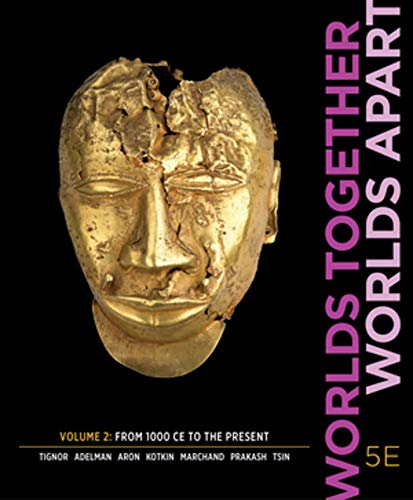 The most globally integrated book in its field, Worlds Together, Worlds Apart is unmatched in helping students draw connections and comparisons across time and place. Streamlined chapters, innovative pedagogy, and NEW scholarship, with expanded coverage of environmental history, make the Fifth Edition the most accessible and relevant yet. NEW interactive learning resources develop history skills and assess comprehension of major themes and concepts.

Robert Tignor (Princeton University) is Professor Emeritus and the Rosengarten Professor of Modern and Contemporary History at Princeton University and the former three-time chair of the history department. With Gyan Prakash, he introduced Princeton’s first course in world history nearly twenty years ago. Professor Tignor has taught graduate and undergraduate courses in African history and world history and written extensively on the history of twentieth century Egypt, Nigeria, and Kenya. Besides his many research trips to Africa, Professor Tignor has taught at the University of Ibadan in Nigeria and the University of Nairobi in Kenya.

Jeremy Adelman (D. Phil. Oxford University) is currently the chair of the history department at Princeton University and the Walter S. Carpenter III Professor of Spanish Civilization and Culture at Princeton University. He has written and edited five books, including Republic of Capital: Buenos Aires and the Legal Transformation of the Atlantic World (1999), which won the best book prize in Atlantic history from the American Historical Association. Professor Adelman is the recent recipient of a Guggenheim Memorial Foundation Fellowship and the Frederick Burkhardt Award from the American Council of Learned Societies.

Peter Brown (Ph.D. Oxford University) is the Rollins Professor of History at Princeton University. He previously taught at London University and the University of California, Berkeley. He has written on the rise of Christianity and the end of the Roman empire. His works include: Augustine of Hippo (1967); The World of Late Antiquity (1972); The Cult of the Saints (1981); Body and Society (1988), The Rise of Western Christendom (1995 and 2002); Poverty and Leadership in the Later Roman Empire (2002). He is presently working on issues of wealth and poverty in the late Roman and early medieval Christian world.

Benjamin Elman (Ph.D. University of Pennsylvania) is a Professor of East Asian Studies and History at Princeton University. He is currently serving as the Director of the Princeton Program in East Asian Studies. He taught at the University of California, Los Angeles for over 15 years. His teaching and research fields include Chinese intellectual and cultural history, 1000-1900; the history of science in China, 1600-1930; the history of education in late imperial China; and Sino-Japanese cultural history, 1600-1850. He is the author of five books: From Philosophy to Philology: Intellectual and Social Aspects of Change in Late Imperial China (1984, 1990, 2001); Classicism, Politics, and Kinship: The Ch'ang-chou School of New Text Confucianism in Late Imperial China (1990); A Cultural History of Civil Examinations in Late Imperial China (2000); On Their Own Terms: Science in China, 1550-1900 (2005); and A Cultural History of Modern Science in China (2006). He is also the creator of "Classical Historiography for Chinese History" at http://www.princeton.edu/~classbib/, a Web-based bibliography and teaching site published since 1996 and continually revised.

Stephen Kotkin (Ph.D. University of California, Berkeley) is Professor of History and teaches European and Asian history at Princeton University, where he also serves as director of Russian Studies. He is the author of Armageddon Averted: The Soviet Collapse, 1970–2000 (2001) and Magnetic Mountain: Stalinism as a Civilization (1995) and is a coeditor of Mongolia in the Twentieth Century: Landlocked Cosmopolitan (1999). His upcoming book is entitled Impaled Horses: Labyrinths of the Ob River Basin, which is a study of the Ob River valley over the last seven centuries. Future works include a biography of Joseph Stalin entitled Stalin’s World. Professor Kotkin has also served twice as a visiting professor in Japan.

Gyan Prakash (Ph.D. University of Pennsylvania) is professor of modern Indian history at Princeton University and a member of the Subaltern Studies Editorial Collective. He is the author of Bonded Histories: Genealogies of Labor Servitude in Colonial India (1990), Another Reason: Science and the Imagination of Modern India (1999) and Mumbai Fables (2010). Professor Prakash edited After Colonialism: Imperial Histories and Postcolonial Displacements (1995) and Noir Urbanisms (2010), codited The Space of the Modern City (2008) and Utopia/Dystopia (2010), and has written a number of articles on colonialism and history writing. He is currently working on a history of the city of Bombay. With Robert Tignor, he introduced the modern world history course at Princeton University.

Brent Shaw (Ph.D. Cambridge University) is the Andrew Fleming West Professor of Classics at Princeton University where he is Director of the Program in the Ancient World. He was previously at the University of Pennsylvania, where he chaired the Graduate Group in Ancient History. His principal areas of specialization as a Roman historian are in the subjects of Roman family history and demography, sectarian violence and conflict in Late Antiquity, and in the regional history of Africa as part of the Roman empire. He has published Spartacus and the Slaves Wars (2001), edited the papers of Sir Moses Finley, Economy and Society in Ancient Greece (1981), and published in a variety of books and journals, including The Journal of Roman Studies, The American Historical Review, The Journal of Early Christian Studies, and Past & Present.

Stephen Aron (Ph.D. University of California, Berkeley) is Professor of history at the University of California, Los Angeles and Executive Director, Institute for the Study of the American West, Autry National Center. A specialist in frontier and western American history, Aron is the author of How the West Was Lost: The Transformation of Kentucky from Daniel Boone to Henry Clay and American Confluence: The Missouri Frontier from Borderland to Border State. He has also published articles in a variety of books and journals, including the American Historical Review, the Pacific Historical Review, and the Western Historical Quarterly.

Xinru Liu (Ph.D. University of Pennsylvania) is Assistant Professor of early Indian history and world history at the College of New Jersey. She is associated with the Institute of World History, Chinese Academy of Social Sciences. She is the author of Ancient India and Ancient China: Trade and Religious Exchanges, AD 1-600 (1988); Silk and Religion: an Exploration of Material Life and the Thought of People, AD 600-1200 (1996); Connections across Eurasia: Transportation, Communication, and Cultural Exchange on the Silk Roads, co-authored with Lynda Norene Shaffer (2007); A Social History of Ancient India (1990 in Chinese). Professor Xinru Liu dedicates her life to promote South Asian studies and world history studies in both the United States and the People's Republic of China.

Suzanne Marchand (Ph.D. University of Chicago) is associate professor of European and intellectual history at Louisiana State University, Baton Rouge. Professor Marchand also spent a number of years teaching at Princeton University. She is the author of Down from Olympus: Archaeology and Philhellenism in Germany, 1750–1970 (1996) and is currently writing a book on German “orientalism.”

Holly Pittman (Ph.D. Columbia University) is Professor of Art History at the University of Pennsylvania where she teaches art and archaeology of Mesopotamia and the Iranian Plateau. She also serves as Curator in the Near East Section of the University of Pennsylvania Museum of Archaeology and Anthropology. Previously she served as a curator in the Ancient Near Eastern Art Department of the Metropolitan Museum of Art. She has written extensively on the art and culture of the Bronze Age in the Middle East and has participated in excavations in Cyprus, Turkey, Syria, Iraq, and Iran where she currently works. Her research investigates works of art as media through which patterns of thought, cultural development, as well as historical interactions of ancient cultures of the Near East are reconstructed.

Michael Tsin (Ph.D. Princeton) is associate professor of history and international studies at the University of North Carolina at Chapel Hill. He previously taught at the University of Illinois at Chicago, Princeton University, Columbia University, and the University of Florida. Professor Tsin's primary interests include the histories of modern China and colonialism, and he is the author of Nation, Governance, and Modernity in China: Canton, 1900-1927 (paperback ed., 2003). His current research explores the politics of cultural translation with regard to the refashioning of social and institutional practices in China since the mid-nineteenth century.

Shipping: US$ 19.54
From United Kingdom to U.S.A.
Destination, rates & speeds

Book Description Book & Merchandise. Condition: new. Book & Merchandise. The most globally integrated book in its field, Worlds Together, Worlds Apart is unmatched in helping students draw connections and comparisons across time and place. Streamlined chapters, innovative pedagogy and NEW scholarship, with expanded coverage of environmental history, make the Fifth Edition the most accessible and relevant yet. NEW interactive learning resources develop history skills and assess comprehension of major themes and concepts. Global connections and comparisons, now more accessible and interactive. Shipping may be from multiple locations in the US or from the UK, depending on stock availability. Seller Inventory # 9780393624854

Book Description Paperback. Condition: New. The most globally integrated book in its field, Worlds Together, Worlds Apart is unmatched in helping students draw connections and comparisons across time and place. Streamlined chapters, innovative pedagogy and NEW scholarship, with expanded coverage of environmental history, make the Fifth Edition the most accessible and relevant yet. NEW interactive learning resources develop history skills and assess comprehension of major themes and concepts. This is a Brand New book, in perfect condition. Quick dispatch. Seller Inventory # NGR9780393624854

Shipping: US$ 27.93
From United Kingdom to U.S.A.
Destination, rates & speeds