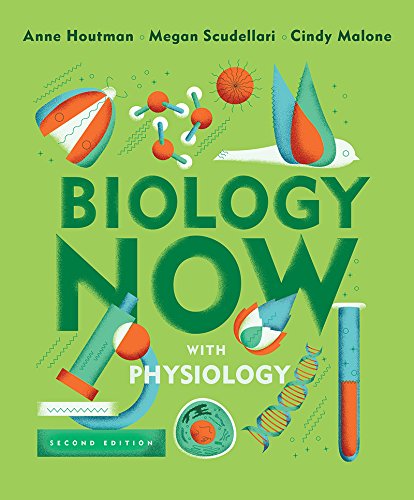 The perfect balance of science and story

Brief chapters are written like science news articles, combining compelling science with intriguing stories. The Second Edition features NEW stories on exciting topics such as CRISPR and the human microbiome, and expanded coverage of the course’s most important content areas. Biology Now is written by an author team made up of a science writer and two experienced teachers. Expanded pedagogy in the book and online encourages students to think critically and engage with biology in the world around them.

Anne Houtman is the President of Earlham College and the Earlham School of Religion. In addition, she serves as Professor of Biology. She has over 25 years of experience teaching non-majors biology at a variety of private and public institutions, which gives her a broad perspective of the education landscape. She is strongly committed to evidence-based, experiential education and has been an active participant in the national dialogue on STEM (science, technology, engineering, and math) education for over 20 years. Anne’s research interests are in the ecology and evolution of hummingbirds. She grew up in Hawaii, received her doctorate in zoology from the University of Oxford, and conducted postdoctoral research at the University of Toronto.

Megan Scudellari is an award-winning freelance science writer and journalist based in Boston, Massachusetts, specializing in the life and environmental sciences. She has contributed to Newsweek, Scientific American, Discover, Nature, and Technology Review, among others. For five years she worked as a correspondent and later as a contributing editor for The Scientist magazine. In 2013, she was awarded the prestigious Evert Clark/Seth Payne Award in recognition of outstanding reporting and writing in science. She has also received accolades for investigative reporting on traumatic brain injury and a feature story on prosthetics that mimic a sense of touch. Megan received an MS from the Graduate Program in Science Writing at the Massachusetts Institute of Technology, a BA from Boston College, and she has worked as an educator at the Museum of Science, Boston.

Cindy Malone began her scientific career wearing hip-waders in a swamp behind her home in Illinois. She earned her BS in Biology at Illinois State University and her PhD in Microbiology and Immunology at UCLA. She continued her post-doctoral work at UCLA in Molecular Genetics. Dr. Malone is currently a distinguished educator and an Associate Professor at California State University, Northridge, where she is the Director of the CSUN-UCLA Bridges to Stem Cell Research Program funded by the California Institute for Regenerative Medicine. Dr. Malone’s research is aimed at training undergraduates and masters degree candidates to understand how genes are regulated through genetic and epigenetic mechanisms that alter gene expression. She has been teaching non-majors biology for over 15 years and has won curriculum enhancement and teaching awards at CSUN.