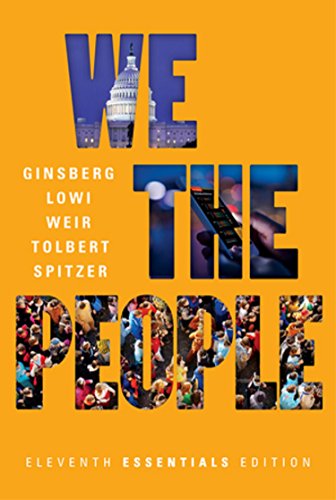 Politics is relevant and participation matters.

We the People, Eleventh Edition, sets a new standard for showing how government affects students lives and why it matters who participates. The Who Are Americans? theme has been expanded to highlight how Americans from different backgrounds experience politics, and new Who Participates? infographics get students thinking critically about who shapes American politics. The textbook, InQuizitive course, and free coursepack are organized around chapter learning goals to ensure students learn the nuts and bolts of American government.

1. We the People (Essentials Eleventh Edition)

2. We the People (Essentials Eleventh Edition)

3. We the People (Essentials Eleventh Edition)