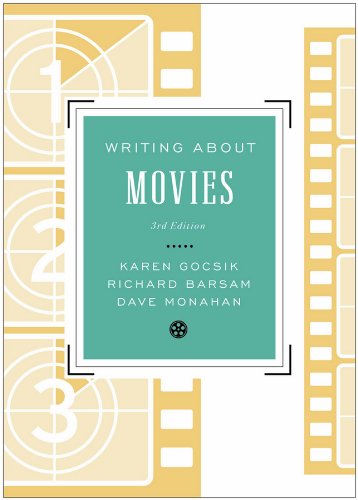 The most succinct, practical, and affordable introduction to thinking and writing about film.

Writing About Movies offers students two books in one: a handy guide to the process of academic writing and a brief but thorough introduction to the basics of film form, film theory, and film analysis. Written by the director of the writing program at Dartmouth College and the authors of the leading introductory film-studies text, Writing About Movies is the only writing guide a student of film will need.

Karen Gocsik is director of the Warren College Writing Program at the University of California, San Diego, where she teaches first-year composition and a graduate-level training course for the program’s teaching assistants. Professor Gocsik previously taught first-year writing at Dartmouth College, where she was also Executive Director of the Writing & Rhetoric Program. In 2012, Professor Gocsik was nationally recognized by The Princeton Review as one of the “300 Best Professors in America.”

Dave Monahan (M.F.A., Columbia University) is Professor of Film Studies at the University of North Carolina, Wilmington. His work as a writer, director, or editor includes Ringo (2005), Monkey Junction (2005), Prime Time (1996), and Angels Watching Over Me (1993). His work has been screened internationally in over fifty film festivals and has earned numerous awards, including the New Line Cinema Award for Most Original Film (Prime Time) and the Seattle International Film Festival Grand Jury Prize for Best Animated Short Film (Ringo).

Richard Barsam (Ph.D., University of Southern California) is Professor Emeritus of Film Studies at Hunter College, City University of New York. He is the author of Nonfiction Film: A Critical History (rev., exp. ed. 1992), The Vision of Robert Flaherty: The Artist as Myth and Filmmaker (1988), In the Dark: A Primer for the Movies (1977), and Filmguide to "Triumph of the Will" (1975); editor of Nonfiction Film Theory and Criticism (1976); and contributing author to Paul Monaco’s The Sixties: 1960–1969 (Vol. 8, History of the American Cinema, 2001) and Filming Robert Flaherty’s "Louisiana Story": The Helen Van Dongen Diary (ed. Eva Orbanz, 1998). His articles and book reviews have appeared in Cinema Journal, Quarterly Review of Film Studies, Film Comment, Studies in Visual Communication, and Harper’s. He has been a member of the Executive Council of the Society for Cinema and Media Studies, the Editorial Board of Cinema Journal, and the Board of Advisers of the History of American Cinema series, and he cofounded the journal Persistence of Vision.