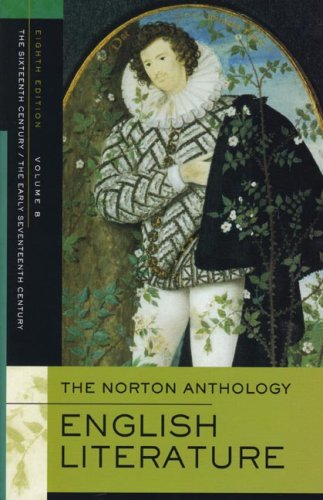 Firmly grounded by the hallmark strengths of all Norton Anthologies―thorough and helpful introductory matter, judicious annotation, complete texts wherever possible―The Norton Anthology of English Literature has been revitalized in this Eighth Edition through the collaboration between six new editors and six seasoned ones. Under the direction of Stephen Greenblatt, General Editor, the editors have reconsidered all aspects of the anthology to make it an even better teaching tool.

Barbara K. Lewalski (Ph.D. Chicago) is William R. Kenan Professor of English and of History and Literature at Harvard University. She is the recipient of the MLA’s James Russell Lowell Prize for Protestant Poetics and the Seventeenth-Century Religious Lyric and the Explicator Prize for Donne’s Anniversaries and the Poetry of Praise. Her other books include Paradise Lost and the Rhetoric of Literary Forms, Writing Women in Jacobean England, Milton: A Critical Biography, and The Polemics and Poems of Rachel Speght (editor). Lewalski is the recipient of Guggenheim and NEH Senior fellowships and is a fellow of the American Academy of Arts and Sciences and Honored Scholar of the Milton Society.

George M. Logan (Ph.D. Harvard) is a Senior Fellow of Massey College in the University of Toronto and the James Cappon Professor of English Emeritus at Queen’s University, Canada, where he was head of the English Department for nine years and an award-winning teacher. He is the author of The Meaning of More’s Utopia and principal editor of the Cambridge edition of Utopia (Latin and English), editor of the Norton Critical Edition of Utopia (3rd edition), More’s History of King Richard the Third, and The Cambridge Companion to Thomas More, and coeditor, with Gordon Teskey, of Unfolded Tales: Essays on Renaissance Romance; he has also written a history of the Indiana University School of Music.

Katharine Eisaman Maus (Ph.D. Johns Hopkins) is James Branch Cabell Professor of English at the University of Virginia. She is the author of Being and Having in Shakespeare; Inwardness and Theater in the English Renaissance; and Ben Jonson and the Roman Frame of Mind; editor of a volume of Renaissance tragedies; and coeditor of English Renaissance Drama: A Norton Anthology, The Norton Anthology of English Literature, and a collection of criticism on seventeenth-century English poetry. She has been awarded Guggenheim, Leverhulme, NEH, and ACLS fellowships, and the Roland Bainton Prize for Inwardness and Theater.