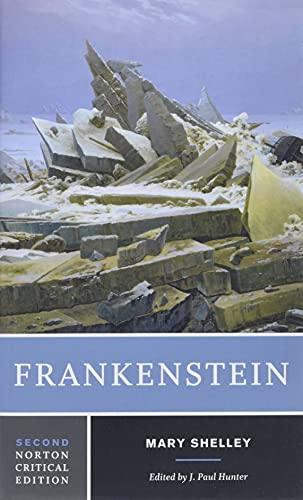 The best-selling student edition on the market, now available in a Second Edition.

This extensively revised Norton Critical Edition includes new texts and illustrative materials that convey the enduring global conversation about Frankenstein and its author. The text is that of the 1818 first edition, published in three volumes by Lackington, Hughes, Harding, Mavor, and Jones. It is accompanied by an expansive new preface, explanatory annotations, a map of Geneva and its environs, and seven illustrations, five of them new to the Second Edition.

Frankenstein, loved by many decades of readers and praised by such eminent literary critics as Harold Bloom, seems hardly to need a recommendation. If you haven't read it recently, though, you may not remember the sweeping force of the prose, the grotesque, surreal imagery, and the multilayered doppelgänger themes of Mary Shelley's masterpiece. As fantasy writer Jane Yolen writes of this (the reviewer's favorite) edition, "The strong black and whites of the main text [illustrations] are dark and brooding, with unremitting shadows and stark contrasts. But the central conversation with the monster--who owes nothing to the overused movie image … but is rather the novel's charnel-house composite--is where [Barry] Moser's illustrations show their greatest power ... The viewer can all but smell the powerful stench of the monster's breath as its words spill out across the page. Strong book-making for one of the world's strongest and most remarkable books." Includes an illuminating afterword by Joyce Carol Oates.