Items related to We the People (Tenth Essentials Edition)

We the People (Tenth Essentials Edition) 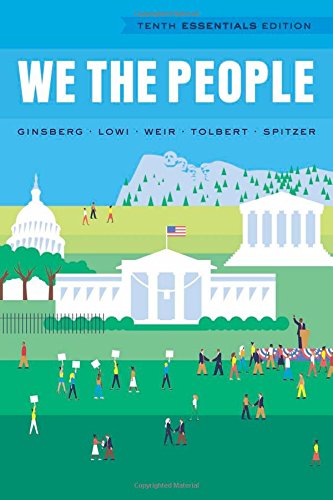 Content instructors trust and features that show students that politics is relevant―in a low-priced, brief text.

We the People, Tenth Essentials Edition, is ideal for showing students that politics is relevant to their lives and that their participation in politics matters. The book engages students with contemporary topics, including digital politics and polarization in government, and presents information on these topics both in the text and in new figures designed to resemble those that students see in online media. New features and resources also teach students to be more savvy consumers of real-world political information. Both the book and free Coursepack are organized around specific chapter learning goals to ensure that students learn the nuts and bolts of American government and to help instructors assess student learning of key concepts.

Caroline Tolbert is Professor of Political Science at the University of Iowa, where she regularly teaches the introductory American government course and was awarded the Collegiate Scholar Award for excellence in teaching and research. Her research explores political behavior, elections, American state politics, and the Internet and politics. Tolbert is coauthor of Digital Citizenship: The Internet Society and Participation; Why Iowa? How Caucuses and Sequential Elections Improve the Presidential Nominating Process; and Virtual Inequality: Beyond the Digital Divide. Digital Citizenship was ranked one of 20 best-selling titles in the social sciences by the American Library Association in 2007. Her latest coauthored scholarly book is Digital Cities: The Internet and the Geography of Opportunity. She is President of the State Politics and Policy Section of the American Political Science Association.

Robert J. Spitzer is Distinguished Service Professor of Political Science at The State University of New York at Cortland. He is the author of 15 books, focusing in particular on the presidency, gun policy, and the Constitution. Spitzer's books include The Presidential Veto; President and Congress; The Presidency and the Constitution (with Michael Genovese); The Politics of Gun Control; The Right to Bear Arms; and Saving the Constitution from Lawyers. His most recent book is Guns Across America. He is also a regular contributor to the Huffington Post and many newspapers.

1. We the People (Tenth Essentials Edition)

2. We the People (Tenth Essentials Edition)