A Journal of the Plague Year (Norton Critical Editions) 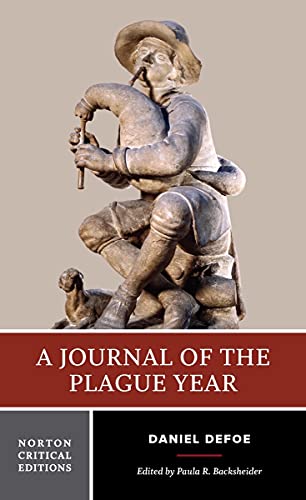 This Norton Critical Edition of one of Defoe’s most important works reprints the 1722 text, the only edition published in Defoe’s lifetime.

The authoritative text has been fully annotated and makes available a perennially popular novel, one that has often been mistaken for an actual eyewitness account of the last great plague in England.

"Backgrounds" encourages comparison of 1665 documents with those of the early 1720s, when England feared a new outbreak of the plague.

Included are official government orders and newspaper accounts as well as writings by Defoe, John Graunt, the College of Physicians, and others.

"Contexts" includes eight comparative pieces united by the theme of a community in crisis.

From Thucydides to Boccaccio to modern accounts by Albert Camus, Michel Foucault, and Susan Sontag, this collection represents some of the most celebrated observers and critics in western civilization who have seen what plagues reveal about human nature.

"Criticism" reprints seven of the best essays on the novel, including interpretations by Sir Walter Scott, Maximillian E. Novak, John J. Richetti, and John Bender, among others.

1. A Journal of the Plague Year (NCE)

2. A Journal of the Plague Year

3. A Journal of the Plague Year (Norton Critical Editions)