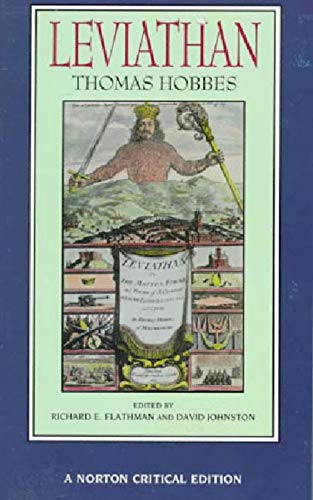 This Norton Critical Edition of arguably the greatest work of political theory written in the English language contains the bulk of Hobbes's treatise, including all chapters except those of interest primarily to professional historical scholars.

Explanatory annotations make Hobbes's sometimes archaic prose accessible to students. The text is based on the 1909 Oxford University Press edition, which in turn was based on one of the most fully corrected copies of the text that was widely available to readers in the seventeenth century. The editors have also noted variations between this text and other authoritative editions.

Backgrounds includes writings on Hobbes's life; selections from his responses to criticism of the book; and criticism and reactions to the work by Sir Robert Filmer, James Harrington, Bishop Bramhall, Edward Hyde (the earl of Clarendon), Gottfried Wilheim Leibniz, Montesquieu, and Henry Sedgwick.

Also included in this edition are a Selected Bibliography, Glossary of Terms, and Index of Authorities Cited in the work.

Hobbes' Leviathan is arguably the greatest piece of political philosophy written in the English language. Richard Tuck's edition has been recognized as the single most accurate and authoritative text since its publication. This revised edition includes a much-amplified and expanded introduction.