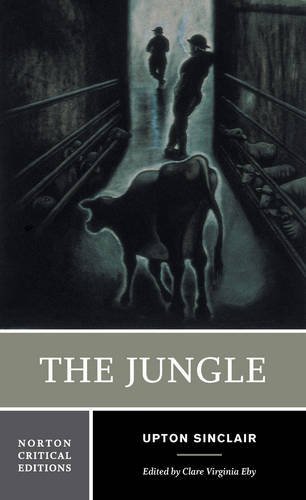 The Jungle's influence has been extraordinary for a literary work. Upton Sinclair's 1906 landmark novel is widely credited with awakening the public fury that led to the passage of the Pure Food and Drug Act (1906), a watershed in consumer protection and government legislation.

This story of the immigrant experience in the harrowing Chicago stockyards has drawn comment from historians, policymakers, and literary critics, and it is a widely assigned teaching text. The novel is accompanied by an introduction and explanatory annotations.

"Criticism" collects eight provocative readings of The Jungle as a literary text, as a historical document in its own right, as a contribution to Progressive-era muckraking, and as an important work in urban, economic, and labor history. Contributions include Jack London, Edward Clark Marsh, Winston Spencer Churchill, Walter Rideout, June Howard, Scott Derrick, Michael Brewster Folsom, and Christopher P. Wilson.

A Selected Bibliography is also included.

An ardent activist, champion of political reform, novelist, and progressive journalist, Upton Sinclair is perhaps best known today for The Jungle his devastating expose of the meat-packing industry. A protest novel he privately published in 1906, the book was a shocking revelation of intolerable labor practices and unsanitary working conditions in the Chicago stockyards. It quickly became a bestseller, arousing public sentiment and resulting in such federal legislation as the Pure Food and Drug Act.-The brutally grim story of a Slavic family who emigrates to America, The Jungle tells of their rapid and inexorable descent into numbing poverty, moral degradation, and social and economic despair. Vulnerable and isolated, the family of Jurgis Rudkus struggles unsuccessfully to survive in an urban jungle.
A powerful view of turn-of-the-century poverty, graft, and corruption, this fiercely realistic American classic is still required reading in many history and literature classes. It will continue to haunt readers long after they've finished the last page."

Book Description Paperback. Condition: New. 1st. Paperback. This story of the immigrant experience in the harrowing Chicago stockyards has drawn comment from historians, policymakers, and literary critics, and it is a widely assigned teaching text.Shipping may be from multiple locations in the US or from the UK, depending on stock availability. 512 pages. 0.499. Seller Inventory # 9780393977790