Items related to Master of the Senate: The Years of Lyndon Johnson III

Caro, Robert A. Master of the Senate: The Years of Lyndon Johnson III 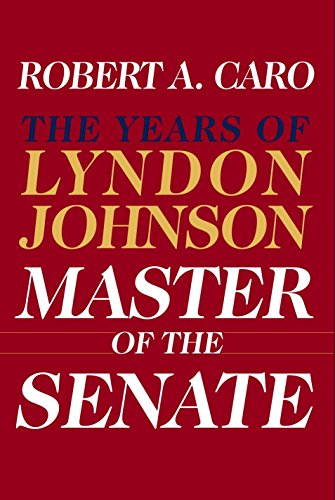 Master of the Senate, Book Three of The Years of Lyndon Johnson, carries Johnson’s story through one of its most remarkable periods: his twelve years, from 1949 to 1960, in the United States Senate. At the heart of the book is its unprecedented revelation of how legislative power works in America, how the Senate works, and how Johnson, in his ascent to the presidency, mastered the Senate as no political leader before him had ever done.

It was during these years that all Johnson’s experience—from his Texas Hill Country boyhood to his passionate representation in Congress of his hardscrabble constituents to his tireless construction of a political machine—came to fruition. Caro introduces the story with a dramatic account of the Senate itself: how Daniel Webster, Henry Clay, and John C. Calhoun had made it the center of governmental energy, the forum in which the great issues of the country were thrashed out. And how, by the time Johnson arrived, it had dwindled into a body that merely responded to executive initiatives, all but impervious to the forces of change. Caro anatomizes the genius for political strategy and tactics by which, in an institution that had made the seniority system all-powerful for a century and more, Johnson became Majority Leader after only a single term-the youngest and greatest Senate Leader in our history; how he manipulated the Senate’s hallowed rules and customs and the weaknesses and strengths of his colleagues to change the “unchangeable” Senate from a loose confederation of sovereign senators to a whirring legislative machine under his own iron-fisted control.

Caro demonstrates how Johnson’s political genius enabled him to reconcile the unreconcilable: to retain the support of the southerners who controlled the Senate while earning the trust—or at least the cooperation—of the liberals, led by Paul Douglas and Hubert Humphrey, without whom he could not achieve his goal of winning the presidency. He shows the dark side of Johnson’s ambition: how he proved his loyalty to the great oil barons who had financed his rise to power by ruthlessly destroying the career of the New Dealer who was in charge of regulating them, Federal Power Commission Chairman Leland Olds. And we watch him achieve the impossible: convincing southerners that although he was firmly in their camp as the anointed successor to their leader, Richard Russell, it was essential that they allow him to make some progress toward civil rights. In a breathtaking tour de force, Caro details Johnson’s amazing triumph in maneuvering to passage the first civil rights legislation since 1875.

Master of the Senate, told with an abundance of rich detail that could only have come from Caro’s peerless research, is both a galvanizing portrait of the man himself—the titan of Capital Hill, volcanic, mesmerizing—and a definitive and revelatory study of the workings and personal and legislative power.

Robert Caro's Master of the Senate examines in meticulous detail Lyndon Johnson's career in that body, from his arrival in 1950 (after 12 years in the House of Representatives) until his election as JFK's vice president in 1960. This, the third in a projected four-volume series, studies not only the pragmatic, ruthless, ambitious Johnson, who wielded influence with both consummate skill and "raw, elemental brutality," but also the Senate itself, which Caro describes (pre-1957) as a "cruel joke" and an "impregnable stronghold" against social change. The milestone of Johnson's Senate years was the 1957 Civil Rights Act, whose passage he single-handedly engineered. As important as the bill was--both in and of itself and as a precursor to wider-reaching civil rights legislation--it was only close to Johnson's Southern "anti-civil rights" heart as a means to his dream: the presidency. Caro writes that not only does power corrupt, it "reveals," and that's exactly what this massive, scrupulously researched book does. A model of social, psychological, and political insight, it is not just masterful; it is a masterpiece. --H. O'Billovich

"A wonderful, a glorious tale . . . It will be hard to equal this amazing book. It reads like a Trollope novel, but not even Trollope explored the ambitions and the gullibilities of men as deliciously as Robert Caro does." --Anthony Lewis, New York Times Book Review

"Mesmerizing . . . A tale rife with drama and hypnotic in the telling . . .The historian's equivalent of a Mahler symphony . . . [It] brings Lyndon blazing into the Senate." --Malcolm Jones, Newsweek

"Caro must be America's greatest living Presidential biographer . . . No other contemporary biographer offers such a complex picture of the forces driving an American politician, or populates his work with such vividly drawn secondary characters." --Richard S. Dunham, BusinessWeek

"Probably the best book ever written about the U.S. Senate. A terrific study of power politics." --Steve Neal, Chicago Sun-Times

"After more than a quarter of a century of research and thought about Lyndon Johnson, Caro sees the man in full . . . Caro's immersion in the man and period yields a fascinating, entertaining abundance." --Lance Morrow, Time

"Brilliant . . . An indefatigable researcher and dazzling prose stylist, Caro has pulled off the seemingly impossible: He has converted the mundane legislative agenda of the Truman-Eisenhower era into a riveting political drama worthy of Robert Penn Warren." --Douglas Brinkley, Boston Globe

"In this fascinating book, Robert Caro does more than carry forward his epic life of Lyndon Johnson. With compelling narrative power and with remarkable subtlety and sensitivity, he illuminates the Senate of the United States and its byzantine power struggles. In this historical tour-de-force, Robert Caro shows himself the true 'master of the Senate.' " --Arthur Schlesinger, Jr.

"To immerse oneself in Robert Caro's heroic biographies is to come face to face with a shocking but unavoidable realization: Much of what we think we know about money, power and politics is a fairy tale . . . Master of the Senate forces us not only to rewrite our national political history but to rethink it as well . . . Compulsively readable." --Eric Alterman, The Nation

"A spectacular piece of historical biography, delicious reading for both political junkies and serious students of the political process . . . Fascinating . . .Worth the wait." --Robert D. Novak, The Weekly Standard

"In terms of political biography, not only does it not get better than this, it can't . . .The highest expression of biography as art . . . Caro's command of his material is absolute . . . As absorbing as an epic movie." --Patrick Beach, Austin American-Statesman

"Master of the Senate is vintage Caro--a portrait so deft, vivid, and compelling that you practically feel LBJ gripping your arm and bending you to his will." --Jean Strouse

"The most complete portrait of the Senate ever drawn. The work, told within the framework of the life of Lyndon Johnson, is really an epic history of the twentieth century." --Michael Wolff, New York

"Every paradox that makes politics truly, endlessly, fascinating . . . is there in . . .The Years of Lyndon Johnson . . .Regarded by many as the greatest political biography of the modern era. Essential reading for those who want to comprehend power and politics." --Daniel Finkelstein, The Times (London)

"For Caro writing a biography is writing a thriller--in Johnson's case, a western. You can't stop turning the pages." --Michael Howard, The Times (London)

"Quite breathtaking . . . One of the great political biographies." --Gordon Brown, The Times (London)

"In this magnificent work, Robert Caro has given us the grand and absorbing saga of Lyndon Johnson, the U.S. Senate, and the Democratic Party at mid-century. The richly cadenced prose is hypnotic, the research prodigious, the analysis acute, the mood spellbinding, and the cast of characters mythic in scale. I cannot conceive of a better book about Capitol Hill. An unforgettable, epic achievement in the art of biography." --Ron Chernow

"Caro is a master of biography . . . with his Tolstoyan touch for storytelling and drama . . . A dazzling tour de force that certifies Caro as the country's preeminent specialist in examining political power and its uses." --Paul Duke, Baltimore Sun

"A gripping tale of suspense. The narrative tension rarely dissipates . . . We know that Johnson will ultimately succeed, but the thrill lies in learning how." --Jordan Rau, Newsday

"Breathtaking to read, like spending a week curled up with a magnificent political novel." --Christopher Lehmann-Haupt, Modern Maturity

"Caro writes history with [a] novelist's sensitivity . . . No historian offers a more vivid sense not only of what happened, but what it looked like and felt like." --Bob Minzesheimer, USA Today

"Caro drives the story forward irresistibly . . . If Mr Caro's work on Johnson has not already set a new standard in American political biography, it surely will when his story of Johnson's presidency is complete." --The Economist

"Does it live up to the profound success of the earlier volumes? The answer is a resounding yes . . . The biography of the season." --Brad Hooper, Booklist

"Magisterial . . . A Plutarch (or perhaps Suetonius) for our time: would that all political biographies were so good." --Kirkus Reviews

Master of the Senate: The Years of Lyndon Johnson

Master of the Senate : The Years of Lyndon Johnson

Master of the Senate: The Years of Lyndon Johnson III (Hardback or Cased Book)