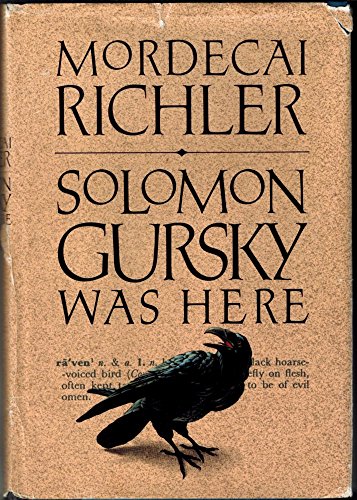 While researching a biography of Solomon Gursky, the blacksheep scion of an influential Jewish family in Montreal, Moses Berger becomes obsessed with uncovering the secret and momentous life of his subject

About the Author:
Mordecai Richler was an acclaimed Canadian novelist and essayist born in Montreal in 1931. He won the Commonwealth Prize, the Paris Review Humour Prize, was twice shortlisted for the Booker Prize for his novels Solomon Gursky Was Here and St. Urbain's Horseman, and was nominated for an Oscar for his screenplay of The Apprenticeship of Duddy Kravitz. He died in 2001.
From Publishers Weekly:
Brimming with sardonic humor, antic imagination and bravura storytelling skill, Richler's fifth novel (after Joshua Was Here ) is an interlocking account of the outrageously bold and daring eponymous protagonist, and of his would-be biographer, brilliant but alcoholic Moses Berger, obsessed with discovering the mysteries of Solomon's life and--maybe--his death. Perhaps inspired by Canada's Bronfman family, Richler creates the three Gursky brothers, bootleggers turned liquor industry tycoons, who are descended from the legendary rapscallion, lecher and arctic explorer Ephraim Gursky. Ephraim's exploits--among other things, he was a survivor of Sir John Francis's ill-fated 1845 expedition to search for the Northwest Passage--are echoed in the adventures of his grandson Solomon, who fights with his treacherous brother Bernard for control of the burgeoning empire. Engrossed in his Gursky research, Moses abandons his once-promising career and endures the loss of the woman he loves. Constructed jigsaw fashion with kaleidoscopic chronology, the novel takes on the tension of a thriller as several mysteries--Why do the members of an Eskimo tribe wear shawls with four fringes? Is cannibalism a family trait? Did Solomon really die in the plane crash?--escalate simultaneously. As usual, Richler does a perfect, irreverent take on all levels of Canadian society, including impoverished, raunchy backwoodsmen, rabid racists, Jewish parvenus and dessicated blueblood Montrealers. If some of his scenes verge on high camp (a bloody Passover seder is a bit outre) he gives readers their money's worth of humor, suspense and all-round entertainment. 40,000 first printing; BOMC alternate.
Copyright 1990 Reed Business Information, Inc.